Umbria or Tuscany: How to Decide Which Picturesque Region to Visit

Each Italian region is unique. For such a small peninsula, the diversity of history, art, culture, and cuisine from region to region is remarkable. At first glance, Umbria and Tuscany seem to have a lot in common. Both are celebrated for their hilltop towns, spectacular scenery, and delicious rustic meals; but don’t be fooled: each has its own charms, atmosphere, and traditions.

How to choose between Umbria and Tuscany

When designing an Italian adventure, it can be difficult to choose which of Italy’s breathtaking regions to visit. The travel experts at Ciao Andiamo love every pocket and corner of Italy for reasons unique from one area to the next, and this is why the authentic journeys we design are always individually tailored with our travelers in mind. We’ve written this guide to help you learn more about the acclaim of Tuscany and allure of Umbria so that you can decide for your next visit: Umbria or Tuscany (or both!)?

Visit Umbria and Tuscany for the impressive cathedrals 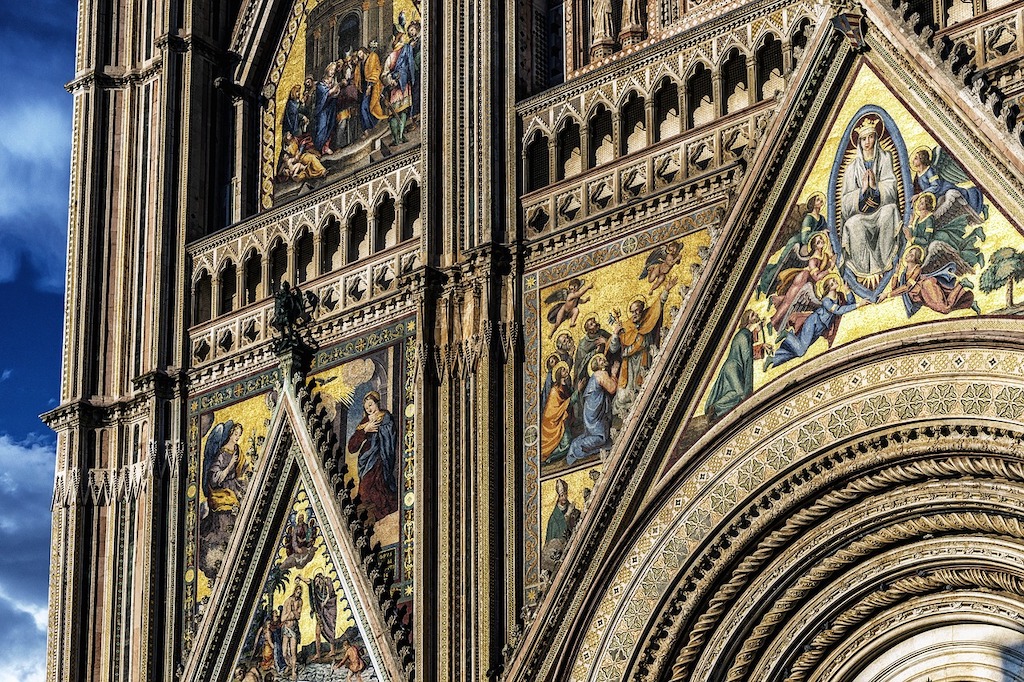 Each region boasts beautiful cathedrals, like this one in Orvieto, Umbria. Image by Peter H from Pixabay

Brunelleschi’s Duomo of Florence is an architectural masterpiece and must-see for visitors to the region, while the Duomo complex of nearby Siena, in Tuscany, merits a full tour inside, out…and up, as visitors can now explore the eaves of the magnificent cathedral.

In Umbria, finding striking basilicas in small town settings–like Orvieto’s magnificent cathedral–is all the more impressive. The sensational gothic cathedral stands out against Orvieto’s austere city center. Inside, frescoes that rival those in Rome grace the walls. Then there is the Basilica di San Francesco in Assisi. A UNESCO World Heritage Site and popular destination for religious pilgrims, the cathedral boasts massive paintings and frescoes by Cimabue, Lorenzetti, and the school of Giotto.

Art and architecture are on full display in the many basilicas, cathedrals, and chapels of Tuscany and Umbria.

Umbria and Tuscany are great for nature lovers

Active travelers can find outdoor fun in both regions. Visitors to Umbria and Tuscany can hike and bike, mountaineer, and horseback ride. Each region has multiple national and regional parks to explore. Kayak and sail along the coast in Tuscany or spelunk, raft, and kayak in Umbria. For a new perspective in either region, take to the air to paraglide or hang glide over the breathtaking landscapes, or take it slow with a hot-air balloon ride.

Visit Tuscany for the unmatched art 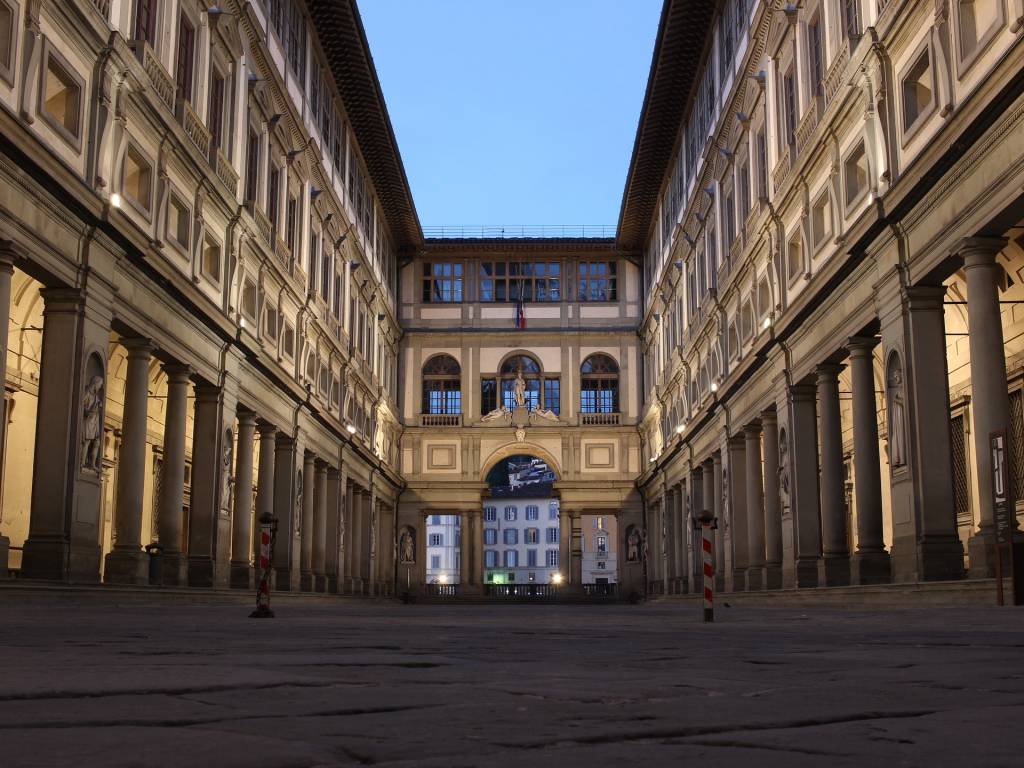 The explosion of art and architecture in the Middle Ages and Renaissance derived in part from the historic rivalries between towns. Though there were frequent wars, outdoing your neighbor in artistic wealth and architectural feats was just as important as a victory on the battlefield. The various cities in Tuscany and Umbria spent centuries trying to outdo one another, much to the benefit of visitors today.

Great art abounds in Umbria, with artists such as Perugino, Giotto, Cimabue and Pisano leaving their mark in cities from Città di Castello and Terni to Orvieto and Assisi. The Galleria Nazionale dell’Umbria in Perugia’s beautiful Palazzo dei Priori holds work by one of Umbria’s most famous locals: Pietro Vannucci, known as Perugino, who was also the teacher of Raphael.

That said, the sheer quantity of Tuscany’s Medieval and Renaissance art is unparalleled. The Uffizi Gallery alone holds some of the world’s most priceless art. There, you can find masterpieces by Raphael, Lippi, Caravaggio, as well as the Birth of Venus and the Primavera of Botticelli, to name a few. No matter where you are in Tuscany, you’re sure to find some world-class art. 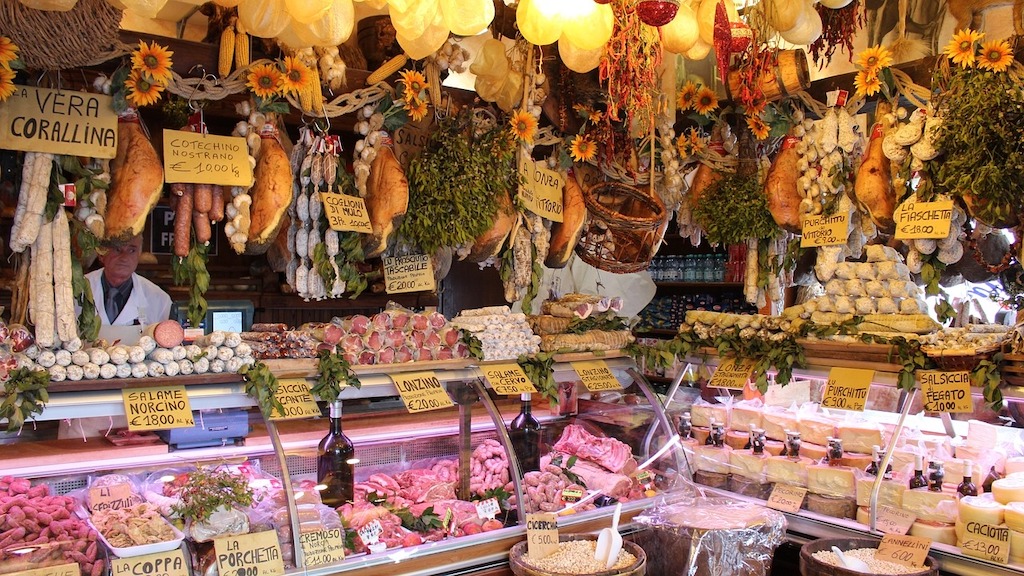 You can get high-quality cured meat in Umbria and Tuscany, but only Umbria enjoys the fame of these norcinerie. Image by GBSurf from Pixabay

You may be familiar with the olive oil, fresh pasta, and steaks of Tuscany, but know less about the specialties of Umbria. In many respects, Umbrian and Tuscan cuisine is quite similar. Both are born of a cucina povera tradition, and feature myriad vegetables and legumes, rustic flavors from game meat like wild boar and rabbit, and homegrown olive oil.

But only Umbria has the highly-prized tartufo nero. May to August is black truffle season, but you can get this pungent delicacy shaved over your pasta or omelet or simmered in a gravy sauce any time of year.

Also worth noting are Umbria’s renowned norcinerie–high-quality pork butcher shops from Norcia–whose butchers take the art of processing pork to an art form. Try it for yourself with a roast porchetta panino or an appetizer of affettati (sliced meats) including the classic Norcia prosciutto.

Visit Tuscany for some of the most famous wines, and Umbria for smaller producers and wines of equal stature 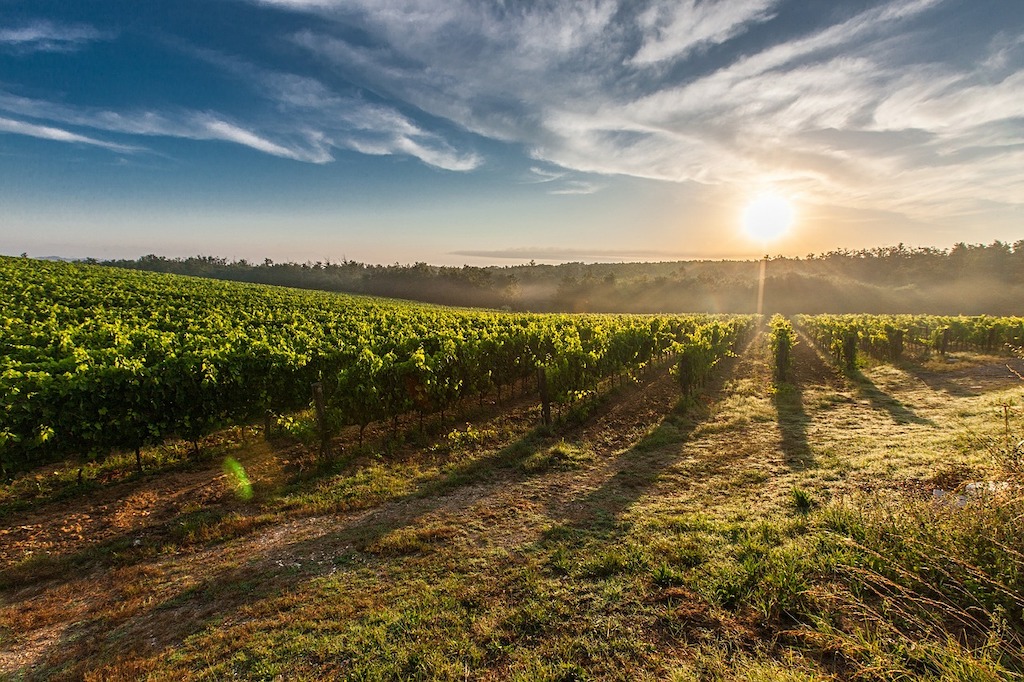 Image by alohamalakhov from Pixabay

Tuscany is home to some of the world’s most well-known wines and wine regions. From Chianti to Montalcino, Montepulciano to Bolgheri, Tuscany’s winemaking prowess is proven. Here you can taste Brunello and Chianti, Rosso di Montalcino and a wealth of Super Tuscans. For a white wine, try the Vernaccia di San Gimignano.

Although Tuscan wines may enjoy more worldwide fame, Umbria’s vineyards have equally noteworthy, delectable options. Try the Orvieto DOC white wine made with the region’s star white grape or the Rosso di Montefalco, a dark red made with Sangiovese grapes.

The king of Umbrian wines, however, is the ancient Sagrantino di Montefalco. A DOCG red wine made with the eponymous grape, Sagrantino is 100% native, aged in oak barrels and, when cellared correctly, can be kept for up to 30 years.

Visit Umbria for cashmere and Tuscany for leather

There’s no better souvenir than a genuine “Made in Italy” product, and the gifted craftsmen of Tuscany and Umbria produce myriad artisanal goods. Artisans in both regions work with gold and precious stones, wood, marble, oil paints, and watercolors, and, of course, various fabrics and textiles. When shopping for clothes and accessories in central Italy, get your leather in Tuscany, and fine cashmere in Umbria.

Leathercraft has been practiced in Tuscany for centuries and the tradition continues today. Get the perfect fit with a pair of tailor-made shoes or go simple with a quality belt, purse, or wallet. Before purchasing anything, be sure to verify that it is truly made in Italy or, better yet, go straight to the artisan’s studios!

Umbria is where you can purchase a beautiful sweater, warm scarf, or elegant purse directly from local cashmere producers. In some cases, you can even visit the cashmere workshops, which are clustered in and around Montefalco, Bevagna, and Marsciano.

Visit Tuscany if you want a seaside vacation 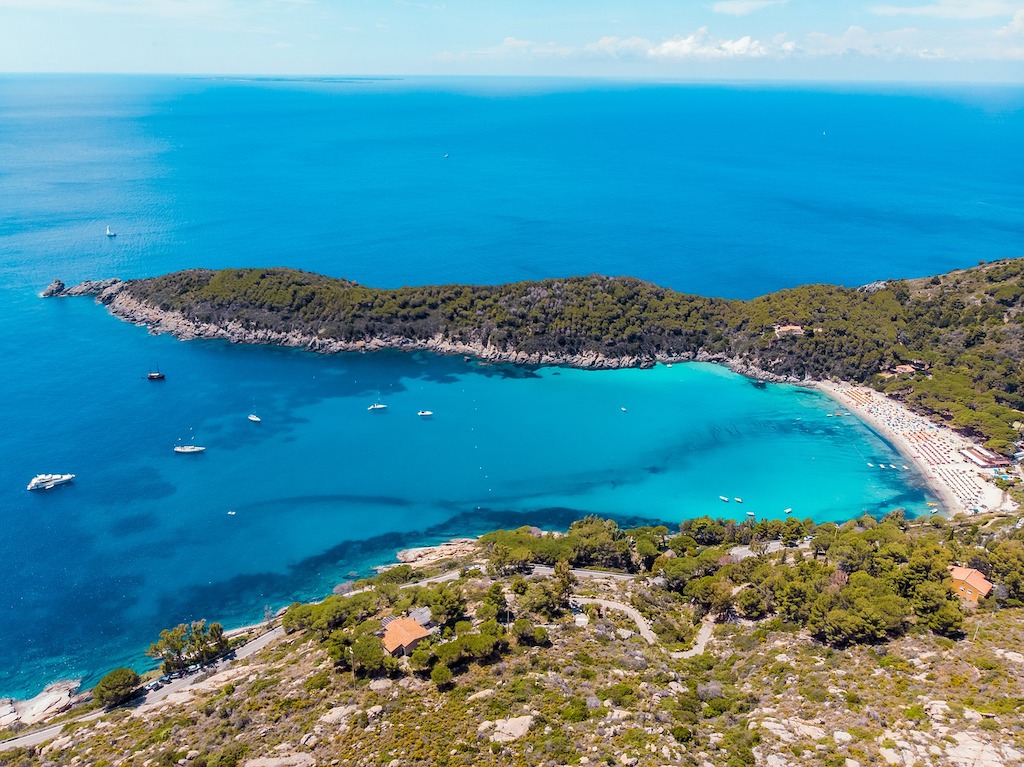 Visit the Tuscan archipelago for a seaside vacation like this one in Isola d’Elba. Image by DanieleFiaschi from Pixabay

Tuscany is the only option of the two for those looking for a Mediterranean seaside vacation. There, visitors can enjoy beaches along the coast or head off shore to explore the Tuscan Archipelago with its beautiful islands like Elba and Giglio.

Umbria might be Italy’s only landlocked region, but it still enjoys some bodies of water. There are mountain springs in the Foligno area, thermal springs north of Orvieto, and prominent lakes, including Lago di Piediluco near the border with Lazio, and Lago di Trasimeno, the largest lake in central and southern Italy.

For those visiting Umbria but still looking to include a visit to the sea, the new tunnels carved into the Apennines can bring travelers from Umbria’s Spello area to the Adriatic Sea in about 30 minutes for an easy seaside day trip.

In general, Tuscany is the perfect place to explore iconic city centers, while Umbria is ideal for soaking in the Italian experience.

It’s true that Tuscany also has small towns that feel less “discovered,” but Umbria has more, and it’s generally easier to escape the crowds in the region known as Italy’s “green heart”.

With only two true cities – Perugia, the region’s capital, and Terni, its industrial powerhouse – Umbria is a region of villages and towns. Of course, Perugia, Assisi, and Orvieto are all must-visits, but we recommend you go beyond the most famous cities to tap into Umbria’s charming small-town ambience. Visit Gubbio, considered the oldest village in Umbria, Spello with its narrow walls and enchanting balconies, or the butcher shop-lined streets of Norcia. Explore the islands on Lago di Trasimeno, the small town of Narni, with its recently excavated underground, or the less-visited village of Bevagna. Tour the ancient streets of Spoleto and enjoy panoramic views from Montefalco.

In Umbria, you can find that authentic Italian spirit, untarnished by international influences. The pace of life is slower and the travel richer with local experiences. In Tuscany, you can live out a scene straight from an iconic film, but you’ll have to share the set. In Umbria, the set is yours! 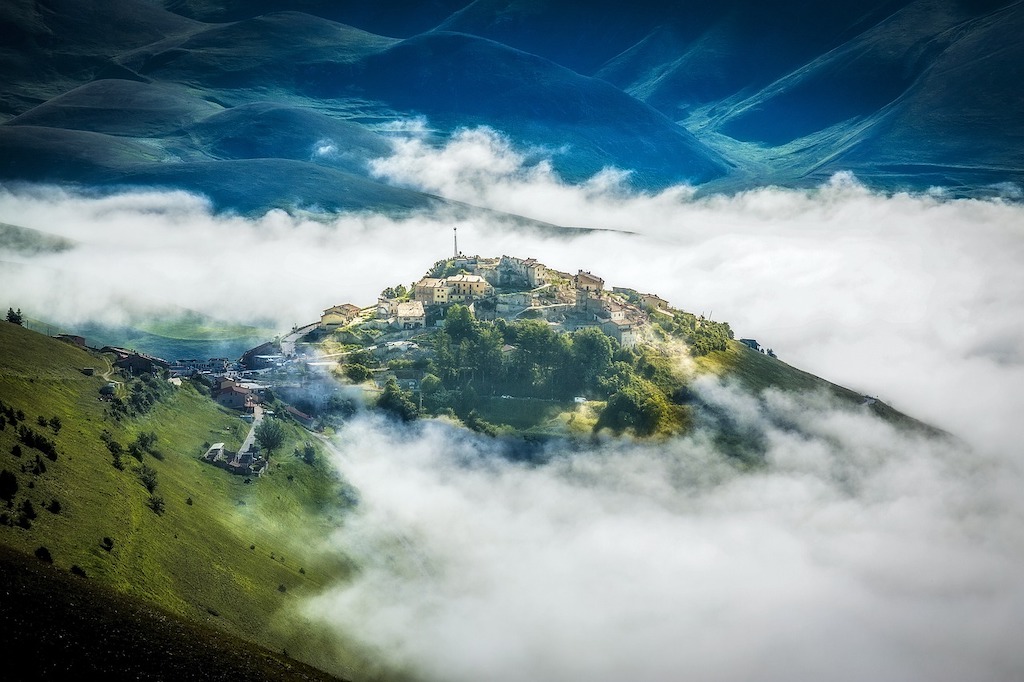 Castelluccio is just one of the many tiny towns that dot the Umbrian countryside. Image by Alberto Agostini from Pixabay

Still can’t decide? Visit both! Venture through the heart of the Italian countryside on our Food, Wine and the Rolling Hills insider journey exploring Umbria and Tuscany through the eyes of locals.

A Letter From the Owners