The holiday season is a wonderful time to see Italy. Though winter is technically the low season, December sees a peak of visitors and festivities with a wealth of special events and seasonal sights.

No matter where you are in the Bel Paese, you’re sure to feel the festive atmosphere. Italian cities big and small decorate their centers with lights, garland and trees, and shops deck out their windows for the holidays. All of Italy is beautiful in December, but here’s where to go for that something specific.

Where to Go and Why:

Vatican City for the religious festivities

Italy is a predominately Roman Catholic country and the holiday season reflects that. Even if you’re not religious, seeing or participating in a mass is a chance to get to know the local culture and Italians Christmastime traditions. Each year on December 24th there is midnight mass held by the Pope in Saint Peter’s Basilica. (It’s often held before midnight, so check online). For those with only a passing interest or simply without a seat, join the crowd in St. Peter’s Piazza to follow the mass on a big-screen TV. Come back at noon on Christmas Day for the Pope’s Christmas message which he gives from his apartment overlooking the square. The square itself is decorated with a massive Christmas tree and a life-size nativity scene.

Bolzano for the over-the-top Christmas markets

All of Trentino Alto-Adige is known for its beautiful Christmas market coming from its long Austrian heritage, but known as is large or over-the-top as Bolzano’s. Going strong for nearly 30 years, the Bolzano Christmas Market strictly sells only locally produced options. Here you can find the region’s handiwork at play with wooden statuettes, decorations and nativities, as well as musical instruments, decorative candles, slippers, hats, stationary and more.

Besides the commercial aspect of the market with many handcrafted gifts and artwork, visitors can see the artisans at work in the craft tent, enjoy local dishes like strudel and mulled wine and enjoy horse-drawn carriage wines, a merry-go-round or puppet theatre for the little ones. 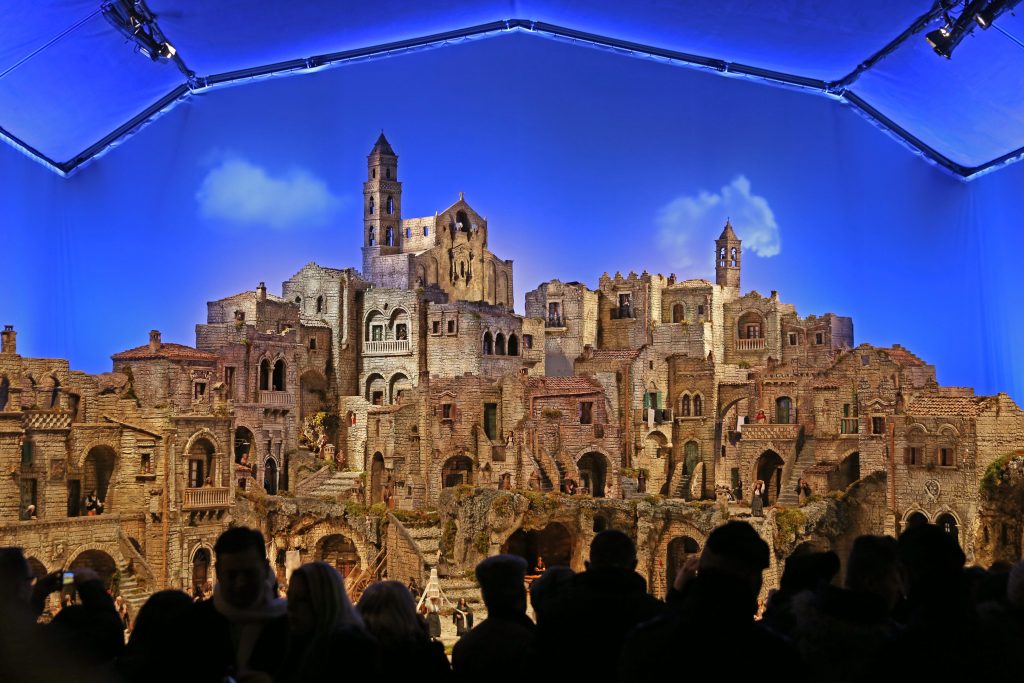 Nowhere in Italy is more famous for its handcrafted Nativity scenes than Naples, and ground zero for this work is via San Gregorio Armeno. A long pedestrian street in the historic center, there are hundreds of shops featuring handmade presepi, but each shop will likely have a slightly different style, color, cut or characters. Not only can you find the classic Jesus, Mary and Joseph figurines, but you can expand on your Nativity to create a veritable city with shepherds, blacksmiths and vendors of all kinds, as well as more modern ideas like pizza-makers, politicians and soccer players.

If the crowds get to be too much on “Christmas Alley” (as San Gregorio Armeno is often called) head to the Museo Nazionale di San Martino in Naples to see the largest Nativity scene in the world, with more than 500 different people, animal, angel and object figurines.

Matera for the living Nativity scene

Known as the presepi viventi, a living nativity scene is when costumed people act out some or all of the Christmas story, usually on Christmas Day, St. Stephen’s on December 26 and the Epiphany on January 6 (when the Three Wise Men brought their gifts to Jesus). There are dozens of living Nativity scenes throughout Italy. In Chia, Lazio there are more than 500 actors. Barga in Tuscany includes at least a hundred costumed people walking through the town behind Mary and Joseph asking for lodging and of course Greccio, Lazio is said to be the home of the very first Nativity scene when Saint Francis of Assisi constructed one in a cave there in 1223.

Still, only one has the nearly surreal backdrop of the sassi di Matera. Houses, churches and monasteries were carved and created in caverns of Matera’s rocks. A completely unique destination no matter the time of year, the landscape is even more evocative with these biblical reenactments.

Turin for the heart-warming coffeehouses

Turin is known for its chocolate, and what better time of year to indulge in this local treat than the holiday season? You can try the Gianduia chocolate or a creamy hot chocolate, but to experience the coffeehouse culture at its most decadent, order a Bicerin. A traditional drink from Piedmont, it’s a mix of chocolate, coffee and cream that will for sure warm you up on a cold winter day.

Orvieto for the week-long Jazz Festival

Umbria’s winter edition is held each December in the suggestive town of Orvieto for five days. That’s five days of music starting from noon and running late into the night at different times and different venues. From the Emilio Greco Museum to the Sala Etrusca in the Palazzo del Capitano del Popolo filled with pianists, food, wine and jazz in the Palazzo dei Sette or the by now annual send off with the Funk Off band in the streets where the city itself is the true location.

Though the city is home to the seat of the Roman Catholic religion, Rome, and all of Italy, has a large Jewish population and a long Jewish history. A huge, twenty-foot menorah is set up in Piazza Barberini, with crowds to match the size every night for the lighting ceremony. A smaller menorah can be found in Piazza Bologna for those wanting to escape the crowds. Mid-December you can join a lively Hanukkah street party on Via del Portico d’Ottavia, in Rome’s Jewish quarter with dancing, processions and, of course, food and wine. And instead of a jelly doughnut, go for the Roman version: the Fritelle de Chanuka. Sweet dough fritters mixed with raisins and anise seeds, fried in oil and topped with hot honey, they’re delicious, local and the perfect way to celebrate Hanukkah in Rome!

Milan for the Christmas shopping and panettone

Milan and shopping go hand-in-hand and that doesn’t change for Christmas shopping. Beyond the lights and enormous Christmas tree in front of the Duomo, shops big and small go all out on their window displays. Worth it even just to window shop, it also makes last-minute gift buying a breeze. When in doubt, go for the city’s hometown Christmas dessert and buy an artisanal panettone. A sweet bread with candied fruits and raisins, panettone has its origins in Milan, but is now a staple throughout Italy during the holidays.

Agnone for a river of fire parade

Every year in the small region of Molise, the town of Agnone gives a nod to its roots in their Christmas fire festival, called the Ndocciata. On Christmas Eve locals in traditional dress carry large, fan-shapped wooden torches through the town, creating a river of fire and light to vigil the coming of Christmas. The parade ends in a huge central bonfire. Recently, the town has held a symbolic festival another weekend before Christmas Eve to allow even visitors to participate.

Bologna celebrates New Year’s Eve with the Fiera del Bue Grasso, or the fat ox fair. The ox is decorated with flowers and ribbons and is the prize for a lottery held to see who will win the ox! People join the procession with candles and fireworks until it ends just before midnight in Piazza Maggiore. There, all of Bologna rings in the new year and symbolically “burns” the old year at midnight by throwing a special dummy known as the Vecchione into a large public bonfire. Designed by a different artist each year, the dummy is worth a look before his destruction and the Piazza has live music, performances and a street market as well. 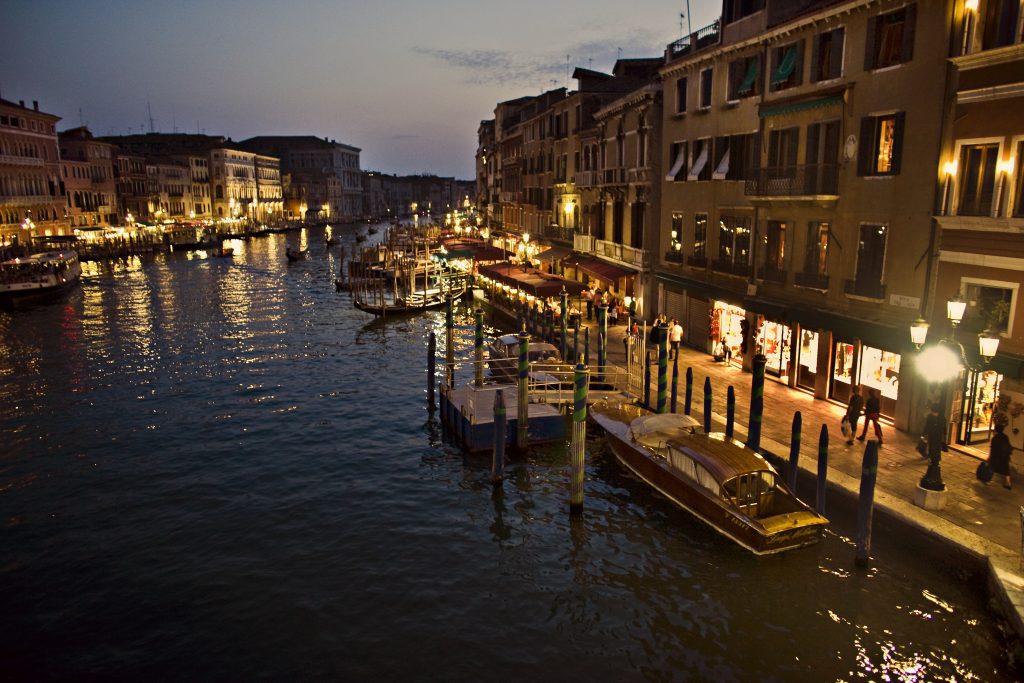 There are few places as romantic as Venice. The atmosphere is charged with beauty and love and on New Year’s Eve it’s even more electric with music, fireworks and a plethora of sparkling wine toasts. See the traditional concert in Teatro la Fenice, but hustle to Piazza San Marco before midnight for the classic “mass kiss” when the bells ring in the New Year.

Otranto to see the first dawn of the year in Italy

The white city in Puglia, Italy’s heel of the boot, celebrates the New Year with the “Alba dei Popoli” festival, or Dawn of the People, a local party that ends at dawn. That’s because the Punta Palascia lighthouse in Otranto is Italy’s easternmost spot, separating the Ionian Sea from the Adriatic, and the first opportunity to see the dawn of the new year in Italy.

The Epiphany on January 6th is the day the three wise men finally reached baby Jesus. In Italy it’s traditionally celebrated by an ugly but friendly “witch” known as La Befana who comes during the night to fill children’s shoes or stockings with candy, toys and sweets. In fact, most people in Italy refer to the Epiphany as “la Befana” and celebrations throughout Italy feature her. In Florence, however, the holiday’s holier roots are still visible every year with a historical procession through the heart of the city. Known as the Calvalcade of the Magi, participants dress in traditional costume to represent the journey of the Magi to Jesus. The parade starts from Palazzo Pitti, crosses the Arno River and ends at the Duomo, with a stop in Piazza della Signoria for a flag throwing performance!

Italians have a saying, “l’Epifania tutte le feste porta via,” meaning with the Epiphany the holidays are over. The holiday season is long in Italy – trees are up well past New Years – but come January 6th it’s time to take down the tree, pack up the decorations and put a close to the festivities. That is, until Carnival season!


Want to celebrate the holidays in Italy? Give yourself the perfect gift with a tailored trip just for you! Contact us today for help designing your dream journey for a no-stress, hassle-free holiday in beautiful Italy.