Discover Sicily: What to Know and Where to Go

With abundant natural beauty, famed ancient history, and noteedly diverse culture, the spectacular island of Sicily has enticed travelers to explore it’s many treasures since ancient times. Sicily’s rich history can be seen in; the Arab-Norman jewels in Palermo, the Doric temples in the Valley of the Temples, and the ancient Greek architecture of Syracuse. Baroque beauty abounds in the Noto Valley, and extensive religious art is abundant, as you discover Sicily. 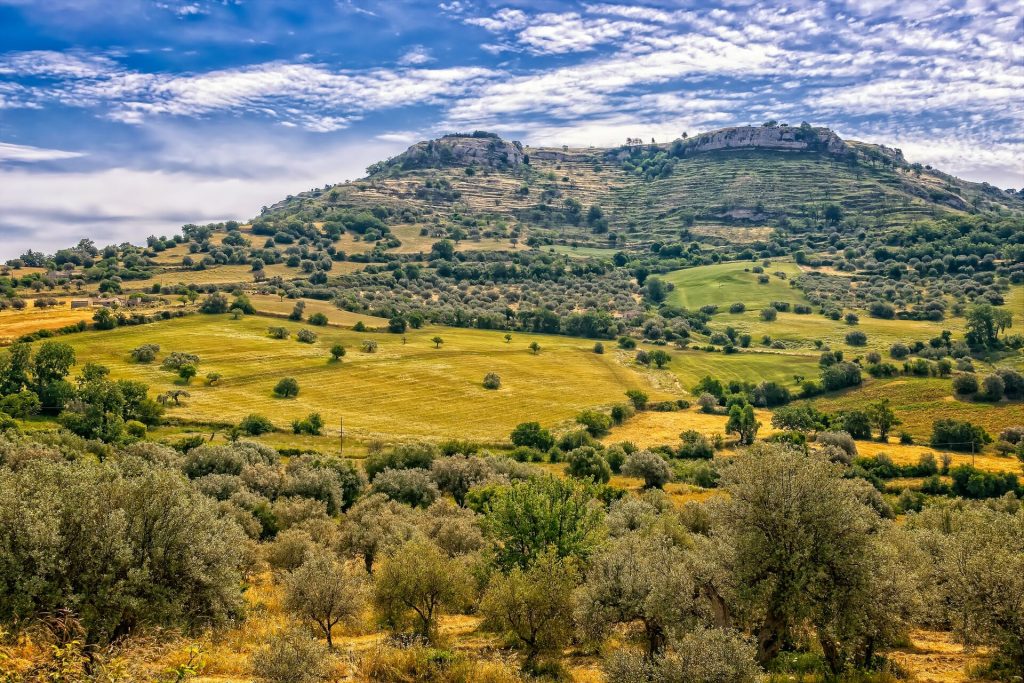 Sicily’s history can also be found in the unique food it offers. A result of many different conquerors, the cuisine is perhaps the most culturally-infused of all of Italy. Here you can find classics, such as pistachios and almonds, citrus and swordfish, along with more exotic spices and ingredients, like saffron and sugar, baccalà and couscous.

Then, of course, there are the landscapes; first and foremost the formidable Mount Etna on Sicily’s east coast. One of Europe’s highest active volcanoes, Etna still erupts from time to time and can dictate life in the area. Then there are the stunning coastline nature reserves including the Zingaro Nature Reserve west of Palermo, or the Vendicari Nature Reserve in Sicily’s southwestern corner. Citrus groves, olive orchards, vineyards, and salt pans, wherever you are, you’re sure to have a stunning backdrop.

What to Know Before You Discover Sicily:

Discovering Sicily in comfort means you need to know its location and how to dress with the season. 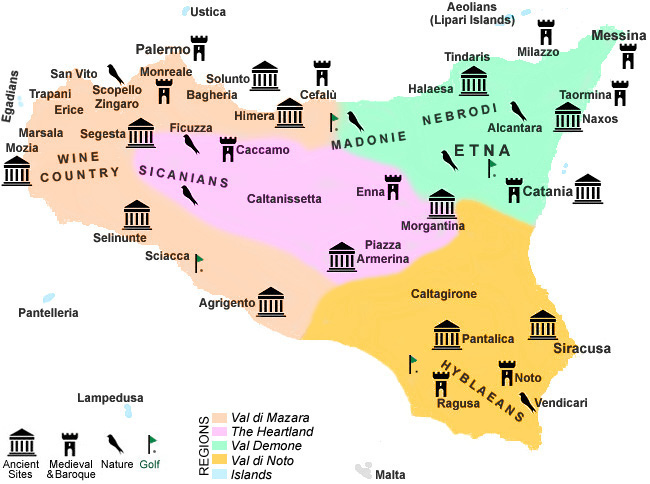 One of 20 regions of Italy, Sicily is an island just off the mainland. It’s the ball to Italy’s boot, located in the extreme southwest of Italy.

Italy’s largest island, Sicily’s most important cities are coastal ports, grown powerful by the bustling sea trade since the ancient Greeks. Though there is a small airport in Trapani and another in the Val di Noto, most flights to Sicily fly into Palermo or Catania, two of Sicily’s largest cities.

The Weather in Sicily

It’s southernmost point, Sicily is hotter than the rest of Italy. In January average highs in Catania can easily reach 60°F, while August sees an average max of 90°F. Though skiers will be hoping for snow on Etna, it’s not impossible to see sunbathers in December, with sea temperatures reaching 59°F. In August, most cities in Sicily empty as residents go north on vacation or head to the beach to stay cool. If you’re not going in the summer, be sure to bring a cover-up as morning and evening can cool down.

Best Places to Discover in Sicily

The island of Sicily truly has it all; bustling port cities, small hill towns, coastal resorts and complete wilderness. There’s a lot to see on just this one Mediterranean island, but here’s where to start: 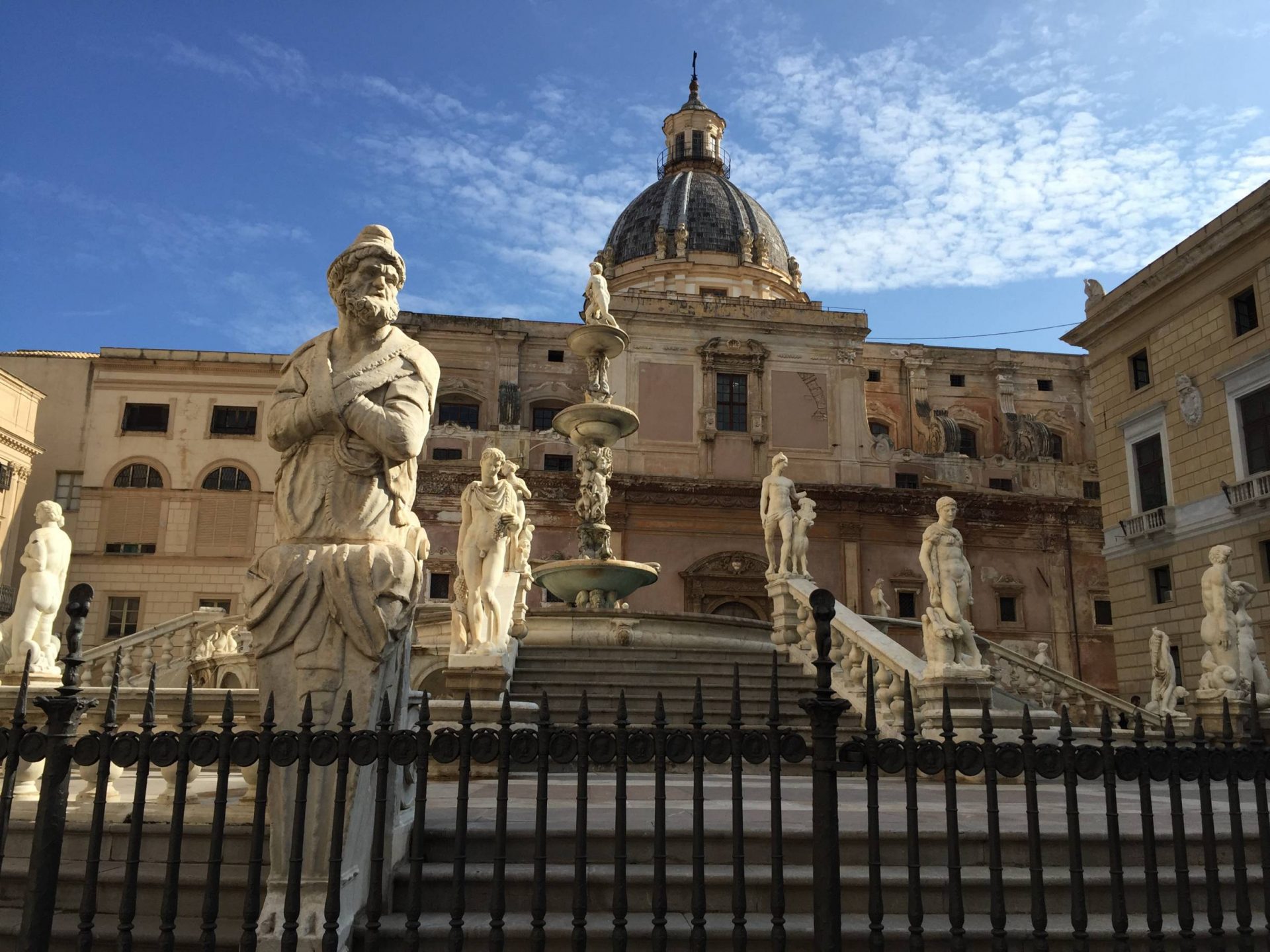 Palermo is an Arab-Norman jewel of a city with strong character, and a world of history, and culture to discover.

Long gone are Palermo’s days as a violent city. Today, it is a favorite for Italian hipsters, ground zero for the start of many a Sicily vacation, and was named the Italian Capital of Culture in 2018.

After Phoenicians founded a colony there in the 8th century, Palermo has since been ruled by Greeks, Romans, Vandals, Byzantines, Arabs, Normans, the Holy Roman emperors, Aragonese, Bourbons, and Austrians…to name a few. This important port city has always been strategic in the Mediterranean, leading to an intriguing mix of cultures, tastes, and ideas. Go see the beautiful Piazza Pretoria and its “shameful” fountain, the Palermo Cathedral and the Teatro Massimo. Palazzo dei Normanni is a must-see, if only for the Palatine chapel inside, a UNESCO World Heritage Site. See the Zisa Palace, the Capuchin catacombs, and the trifecta of gorgeous churches around Piazza Bellini.

Finally, head up the hill to tour the Cathedral of Monreale, a masterpiece of Arab, Norman, and Byzantine art. 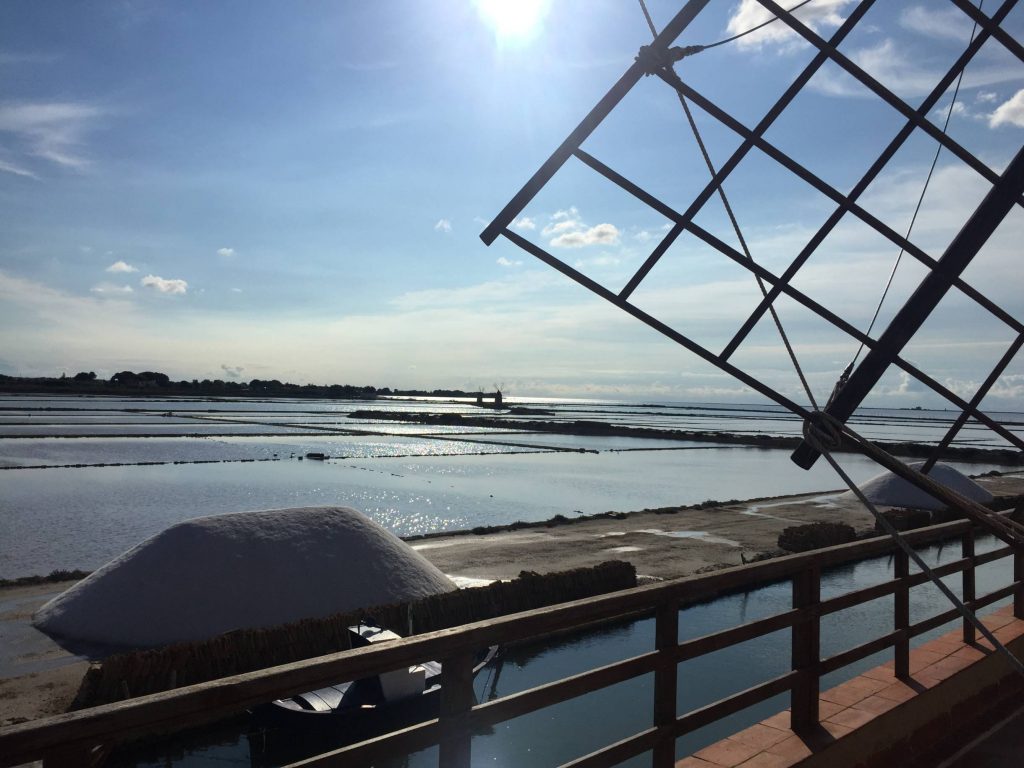 An important trading city since the 13th-century, Trapani’s port still bustles with ferry traffic to and from the nearby Egadi Islands. Tour the kilometers of salt flats along the coast in a pungent nod to the city’s salt harvesting history. The biggest draw is, without a doubt, the ancient salt pans of Trapani and Paceco. Visitors can tour these kilometers of salt flats along the coast, not only to see a glimpse of the area’s long history (many of the same techniques from 1000 AD are still used today) but also to enjoy the natural beauty of the area. Today the salt pans are part of a nature reserve, still allowing a small amount of production, as well as the return of native flora, and fauna.

Located in the hinterland of Sicily, Piazza Armerina is an off-the-beaten-path gem. The town itself has an 18th-century Duomo, and nearby you’ll find the Aidone Archeology Museum. But the real draw is the Villa Romana del Casale, a UNESCO World Heritage Site, and archeological treasure worth an entire day. 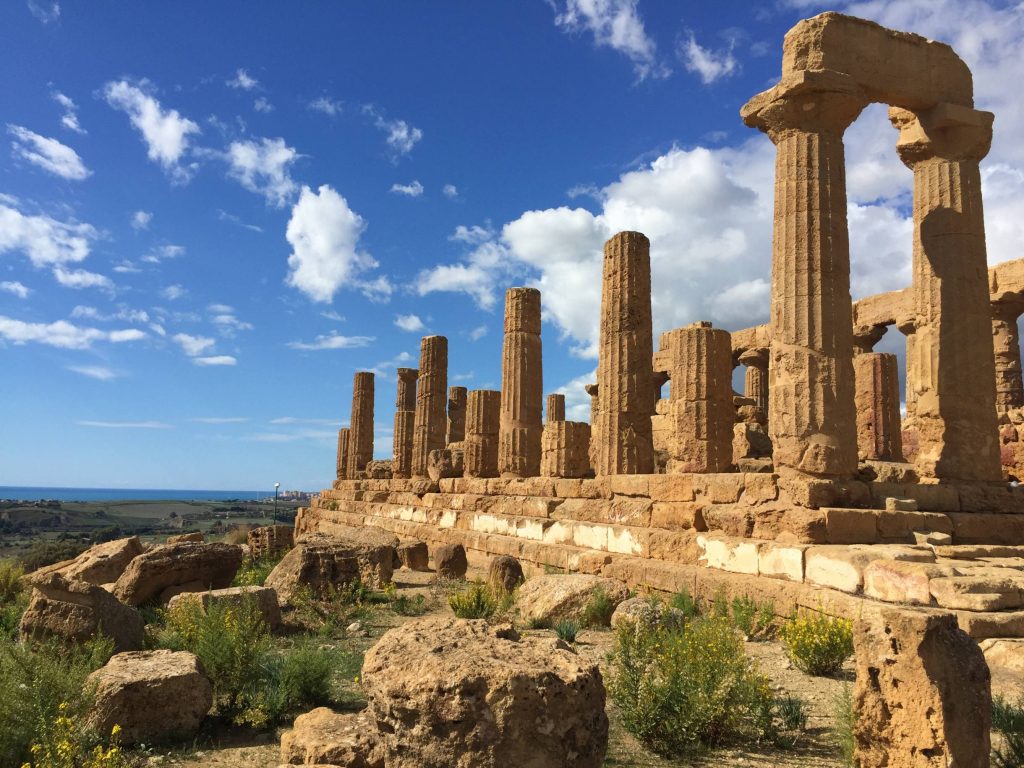 Agrigento is home to the Valley of the Temples, one of the most famed archeological sites in all Italy. Founded as a Greek colony in the 6th century BC, it quickly became one of the leading cities in the Mediterranean. This is still seen today in the massive collection of Doric temples that lie intact in the area’s fields, along with excavations of Hellenistic ruins, and early Christian sites. The area is a UNESCO World Heritage Site since 1997, for its great row of Doric temples, considered to be “among the most extraordinary representations of Doric architecture in the world.” A “testament of Greek civilization” and an example of an “important interchange of human values,” the area once considered the “most beautiful city inhabited by man,” according to the Greek poet Pindar, is now one of the most beautiful archeological sites to be visited by man. 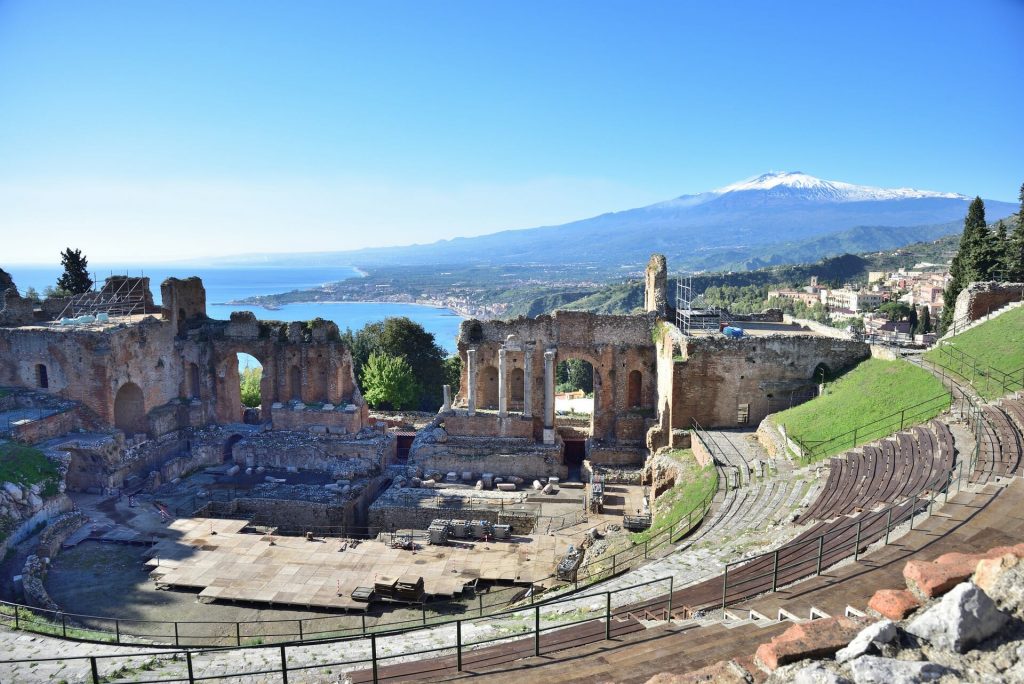 Taormina has been a resort town since the time of the ancient Greeks. With a spectacular location on the side of a mountain along Sicily’s east coast, it’s easy to see why Taormina has a long history of delighting the rich and famous. The town is breathtaking! Perhaps most famous for its Teatro Antico, an ancient Greco-Roman theater still in use today, most visitors are attracted by Isola Bella. Attached to the mountain coast by a small strip of sand, Isola Bella is a tiny nature reserve set in a natural cove. Once the home of Englishwoman Florence Trevelyan, it can now be enjoyed by all. Then, visit the nearby Giardini Naxos, the first Greek colony in Sicily, before taking time to relax somewhere and soak in the wonderful view – this won’t be hard to find.

One of the oldest settlements in Sicily, Syracuse was founded in 734 BC by the Corinthians, who landed on the island of Ortygia (Ortigia). Once the largest city in the ancient world, a visit to Syracuse means stepping back in time through the ruins of the original city in the Parco Archeologico della Neapolis, one of Sicily’s greatest archaeological sites. Here you’ll find Greek ruins, like the Teatro, along with beautiful Baroque buildings framing sun-kissed piazzas. The most beautiful corner is surely it’s minuscule island of Ortygia. Just 1 square kilometer, it’s difficult not to fall in love with the island’s breathtaking views, characteristic streets, and Mediterranean atmosphere. 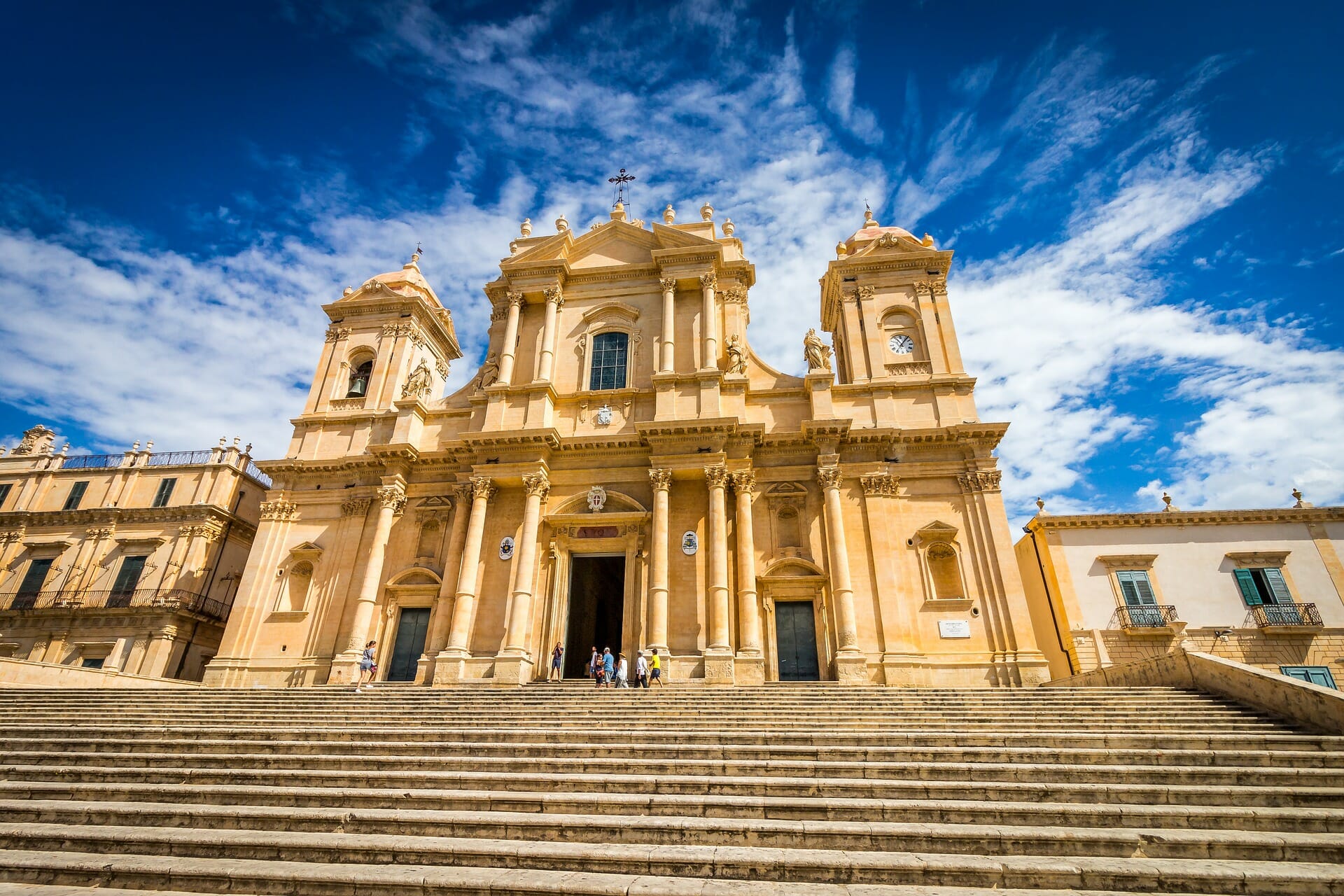 Located in southeastern Sicily in the eponymous Val di Noto, Noto is the epicenter of Baroque architecture in Sicily. The entire town is filled with grand central roads, elegant Baroque palazzi, and beautiful historic town squares. Gorgeous, no matter when you visit, the golden hour is favorite for the delicious hue that reflects off it’s red-gold buildings.

After the original town of Noto was destroyed in a 1693 earthquake the entire town was rebuilt a bit higher on the hill in the 18th-century. Traces of the same style can be found in Modica, and Ragusa, both located in Val di Noto and both worth a visit, thanks to a local architect who worked on all three.

Catania has long had a reputation as a gritty, chaotic city. Though this might still be true, the city still has atmosphere and attitude. It’s one of the few cities in Sicily that feels like a city, with nightlife and energy to match. Catania is also a UNESCO World Heritage Site, along with Noto, thanks to its Baroque architecture. Visit the Piazza del Duomo, the Roman Amphitheater, and the famous Pescheria fish market, for a taste of authentic Italy. As you tour the city, you’re sure to see Mount Etna sitting in the distance, patiently watching over it all.

The best way to discover Sicily is by car – let us handle the stress of transit for you, with completely private transfer service as well as expert guides on our Discover Sicily Trip.

What You Absolutely Have To Eat in Autumn in Italy