Carnevale in Italy brings a burst of color to the dark, cold months of winter.

A huge final celebration to eat, drink and be merry before the restrictions and solemnity of Lent, the festivities in Italy aren’t reserved just to Mardi Gras.

Starting about a month before Ash Wednesday, revelers in Italy celebrate for multiple weekends with sweeping parades, elaborate masks and plenty of brightly colored confetti. You can find traditional Carnival sweets in the bakeries and plenty of tricks and mischief. After all, a Carnevale, ogni scherzo vale! That is, anything goes during Carnival. 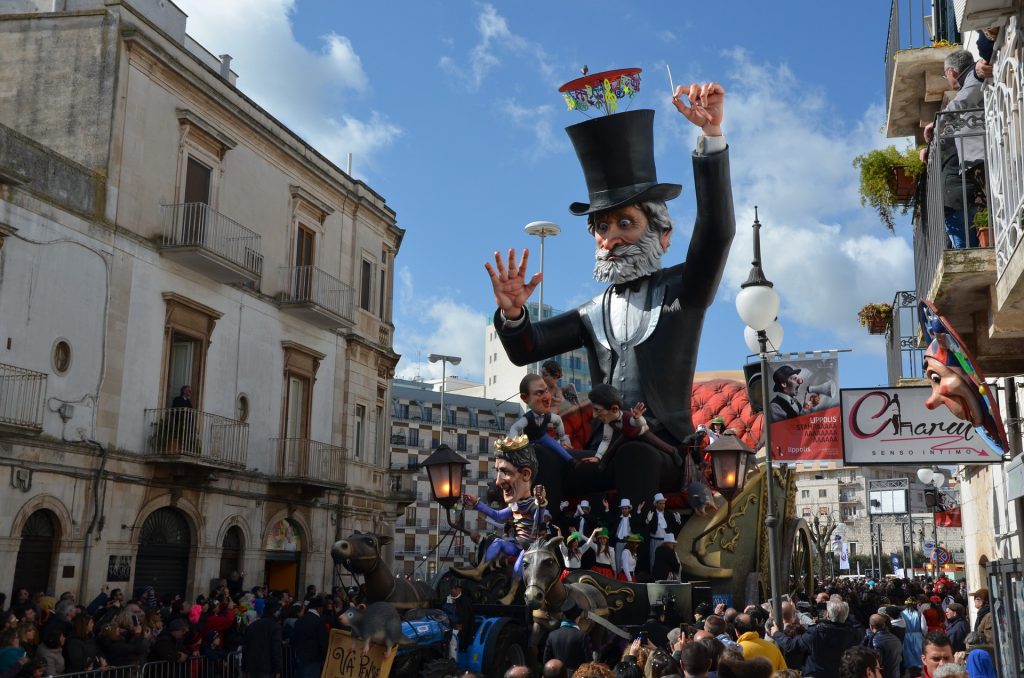 A Carnival parade in Putignano, Puglia. Photo by Salvatore Capotorto from Pixabay

If the celebrations seem a little over-the-top, consider that the roots of this festival can be traced to Ancient Greece and Rome in celebrations that honored the god Bacchus (of wine) and Saturn. Some say they go even further back to primitive celebrations of the end of winter and beginning of spring.

Though its history is pagan, the festival was so widely celebrated and the tradition so strong that it was quickly adapted to fit into the Catholic rituals. During the 40 days of Lent, parties were forbidden and meat, sugar and fats were off-limits. Carnival fit in perfectly as a last hurrah and a way to finish all the stores of rich food and drink before Lent.

After weeks of mischief and parties, expect a more pious and solemn atmosphere in Italy during the weeks of Lent. Easter in Italy is as strongly felt and celebrated as Christmas.

Where to Celebrate Carnevale in Italy

Though everyone knows of the masks and parades of Venice, every town in Italy, even the smallest, has its own Carnevale parade. Small towns will have day care centers and school children march in the street or ride atop team-made floats and school bands play. Bigger cities will bring together floats, bands, dance troupes and group costumes for the parades.

There are some cities, however, that regularly outdo themselves. Here are some of the biggest, most famous Carnival celebrations in all of Italy: 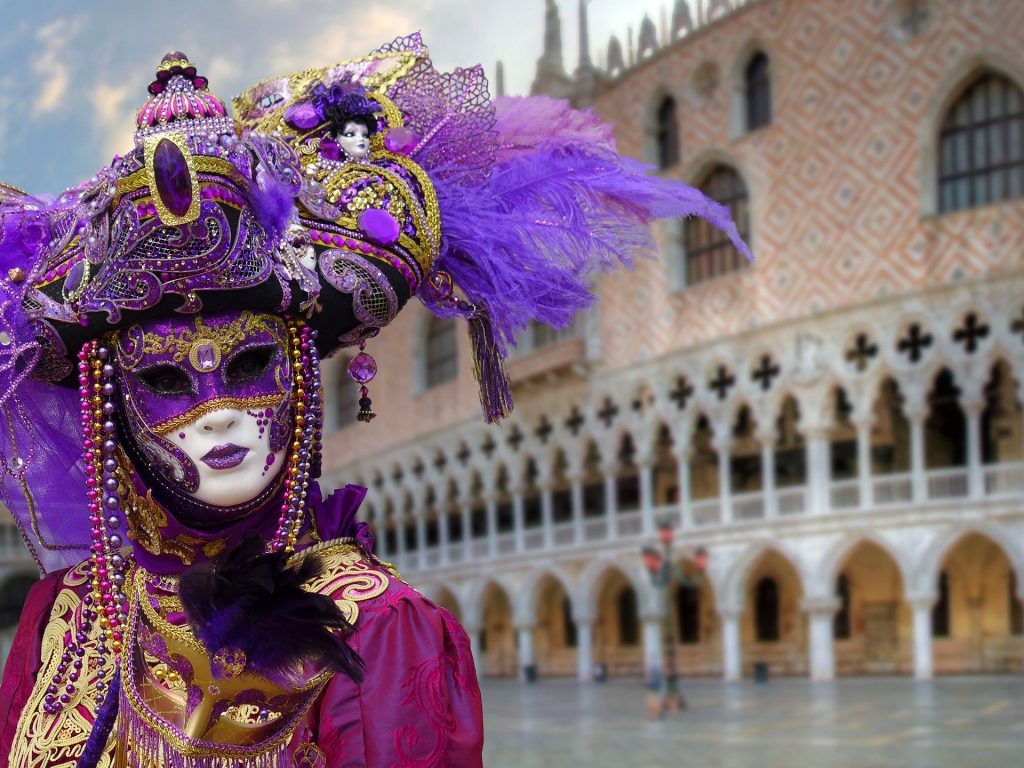 Photo by Serge WOLFGANG from Pixabay

Full of mystery, mischief and intrigue, the Carnival of Venice is undoubtedly one of the most famous Carnival celebrations in the entire world.

Though the start of Venice’s Carnival is disputed, most attribute it to 1296, with an official document from the Senate of Venice declaring a public celebration on the day before Lent. Created as an allowance for citizens for some fun and revelry, the mask fit in perfectly, allowing citizens to celebrate independently of social class or religion.

Carnival masks remained a fixture through the Renaissance, and masked comedy troupes would perform in the piazzas of Venice in the 16th century. These same masks and bacchanalia were banned by the Austrians in the 18th century and again by Mussolini in the 1930s.

After many years, the holiday returned in 1979 in a celebration of the history and culture of Venice.

The 2020 Venice Carnival will begin on Saturday, February 8 and end on Tuesday, February 25. Visitors can view events like the water parade, mask competitions or the infamous flight of the angel, or simply stroll the UNESCO World Heritage city and to see the elaborate and unique costumes.

Today roughly 3 million people travel to Venice to participate in the infamous festa Veneziana, making it the most important event of the city and the biggest carnival celebration in Italy.

Another one of the most important Carnival celebrations in Italy is in Viareggio, on the coast of Tuscany. Started in the late 1800s by the rich bourgeois class who wanted to freely express their discontent of the high taxes, today the attitude continues with massive papier mâché floats satirizing big political and cultural names.

The celebration is most known for these elaborate and impressive floats, made with extraordinary detail and engineering. The tradition is so important, that float-makers begin their work an entire year before Carnival!

Besides the allegorical floats, the entire Carnival of Viareggio is followed by all night musical dances in the streets. This tradition started in the 1920s as “colored all-night dances” or veglioni colorati, where women dressed in specific colors and even the jewelry, confetti and decorations had to match. That plus the city’s Art Deco architecture make for the perfect scenography.

The Carnevale di Viareggio takes place on Fat Tuesday, as well as the four Sundays preceding it. The final parade is followed by a huge fireworks show. Though admission is charged to view the parade, there are festivals, cultural events, concerts and masked balls for free throughout the season.

Repeatedly described as one of Italy’s most beautiful Carnivals, this is likely thanks to the intricate floats decorated with fresh flowers, adding beauty and perfume to the streets of Acireale.

Allegorical papier mâché floats parade down the Baroque streets of Acireale during the Carnival season, but the surprise is in the flower floats.  Dating back to the 16th-century, revelers once celebrated Carnival in Acireale by throwing rotten eggs and lemons, but when those games were officially banned, they were replaced by a much more cultured character: Folk poets, known as abbatazzi, who improvised verses on the streets of the city.

Today, both the floats and poets can still be found and the Carnival of Acireale is widely entitled the “best Carnival in Sicily.” It is so popular, in fact, that the entire thing is reproduced in the balmy summer air of August.

The Carnival of Ivrea is likely the most unique Carnival celebration in Italy. Every year Ivrea, a tiny city near Turin in Piedmont, hosts its famous Battaglia delle Arancie (Battle of the Oranges) in the final days of the Carnival season.

The battle symbolizes an event in 1194 when the people of Ivrea rebelled against the Royal Napoleonic Troops. It is said that the miller’s daughter, “la Mugnaia,” slayed the hated tyrant who ruled the city after he tried to take her, kicking off a rebellion that ultimately won the townsfolk a bit more freedom.

Today, la Mugnaia is always represented by a local beauty, and the event is remembered with an enormous orange battle between helmeted “soldiers” in carriages and unprotected “townspeople” representing different districts on the ground. Those that don’t want to participate wear the traditional berretto rosso, red hats, to be excluded from the battle and can stay protected behind massive nets.

The region of Puglia in Italy’s heel likely has the most Carnival celebrations of any region, but the most famous is in Putignano.

Located in the beautiful Itria Valley, home of trulli houses and interesting karst caves, the ancient town of Putignano is home to the longest Carnival celebration in all of Italy. Every year it starts on Santo Stefano, December 26th, with the Festa delle Propaggini, in which poets recite in local dialect, and ends on Fat Tuesday with a parade and the “funeral” of Carnival, represented as a pig.

Not only is it the longest Carnival celebration, but it is one of the oldest in all of Europe. Putignano’s Carnival dates as far back as 1394, when relics of St. Stephens were transferred inland to Putignano for protection against invaders. The move was so celebrated that peasants left the vineyards to follow the procession, exploding into song and dance upon arrival, as well as improvised lyrics and poems, satirizing against politicians and news, habits and current events in the local dialect.

After December 26, this long Carnival is celebrated every Thursday, but it’s not until the feast day of St. Anthony the Abate, January 17, that Carnival really takes off with parties, feasts, pageants, and parades. From then until Fat Tuesday, every day is Carnival! 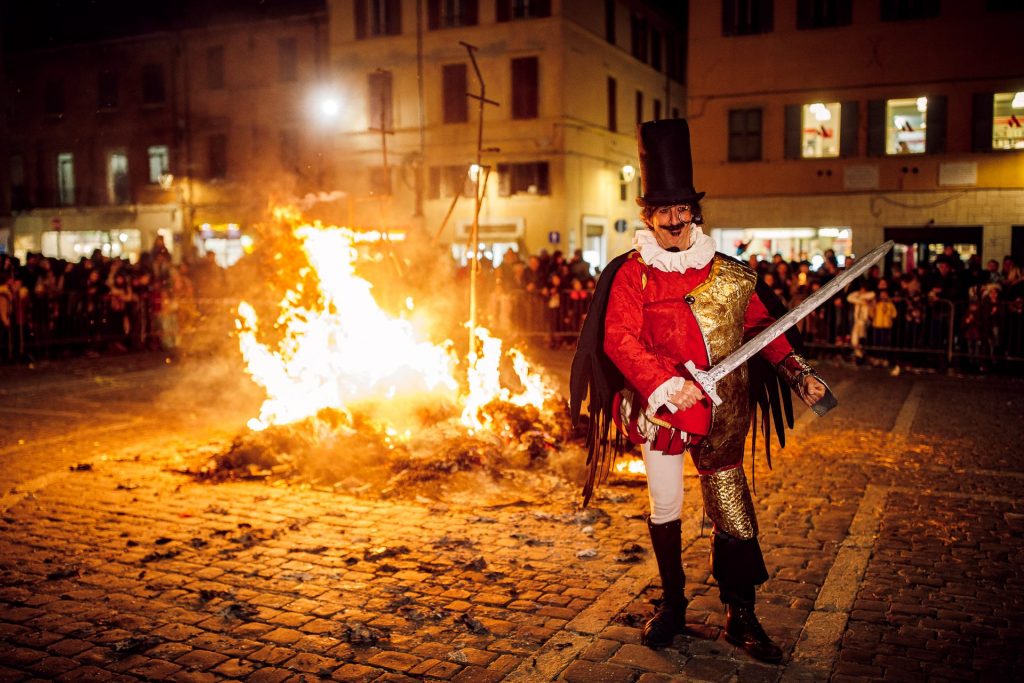 It’s not confetti or tinsel or ribbons thrown about during Fano’s Carnival, but sweets. With the “getto” or throw, the masked floats toss hundreds of pounds of sweets, candies and chocolates to the crowds below. (The crowds come prepared with paper cones to catch the goodies!)

Said to have started in 1347 during a rare moment of peace between two rival families of the time, the Carnival of Fano is known as the sweetest Carnival of Italy.

The floats parade up and down the streets of Fano, ending in a final round with a “luminaria” with lights, fire and color added as night falls. Finally, a massive papier mâché puppet known as “Pupo” or “Vulon” is burnt in the main square to large crowds on the day of Mardi Gras, a practice that is said to take away winter together with the sins of the townspeople.

The Carnival of Cento is known as far back as 1615, thanks to frescoes by hometown painter Gian Francesco “Guercino” Barbieri that document the celebration, but its most celebrated traditions are more recent.

In the early 1900s the people created their own king to symbolize the city’s Carnival, a character to represent his fellow citizens, called Tasi.

During the final parade, Tasi is burned in a bonfire in front of the Rocca while an impressive fireworks show lights up the sky in a scenographic display. Before he is burned, his will is read in the local dialect and his possessions are given to Cento’s most famous citizens – actual citizens of Cento!

In 1993, the Cento Carnival was twinned with the Carnival of Rio de Janeiro and began displaying allegorical floats inspired by the exhibitions of Rio. Running for five Sundays prior to Lent, the parades circle the city multiple times and throw inflatable and soft objects into the crowd. 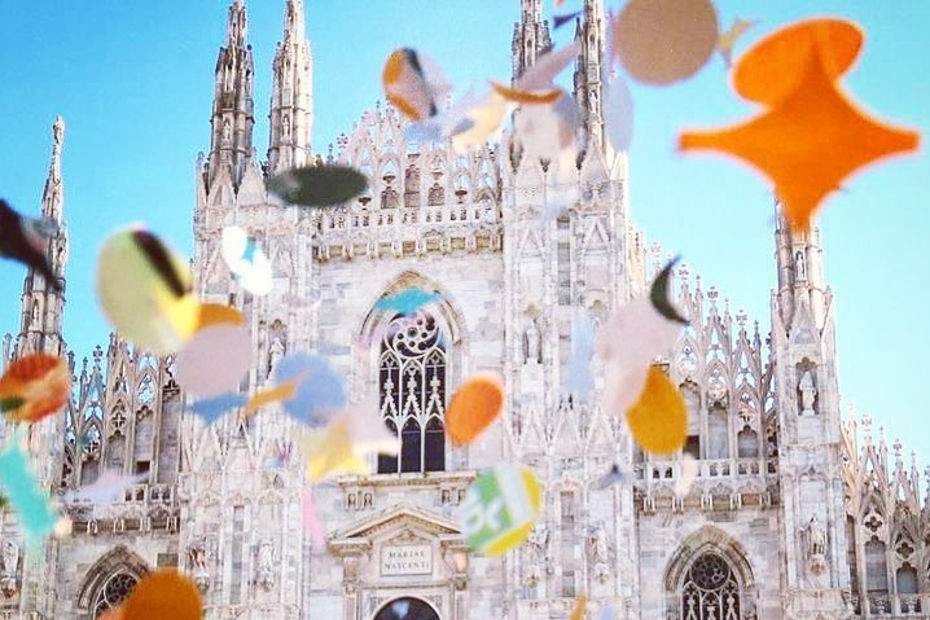 Technically, the Carnival celebrations in Milan aren’t much different than any of the others. There are parades and parties, confetti and costumes. The difference here is all in the timing.

Milan’s carnival is the last to be celebrated. The Ambrosian Carnival, named after Milan’s patron saint, holds its final party after the Italian Carnival has officially ended.

As tradition has it, the city’s patron saint, Sant’Ambrogio (St. Ambrose) was on a religious pilgrimage and asked to postpone the final Carnival celebrations until he got back. So every year, Milan’s carnival is celebrated four days later on the Saturday after Fat Tuesday, ending the Carnival season in the beautiful Piazza del Duomo.

A Letter From the Founder