Florence is filled with beautiful churches.

Travelers arriving in the Renaissance city are right away greeted by the massive, red-tiled cupola of the Duomo. Visible from most parts of Florence, the Duomo is a clear and striking icon of the city. Travelers could spend hours exploring this Florentine gem, whether climbing to the top of the Dome to enjoy panoramic views  over Firenze or studying the intricate details of the Baptistry doors.

However, there are myriad breathtaking churches throughout Florence, some of which visitors often overlook. We understand. Florence is so rich in art, history, and culture it can be difficult to know where to start. So let us help!

The Most Beautiful Churches in Florence: Centro Storico

A little background knowledge can go a long way when planning a trip to Florence. Here’s the rundown on the churches in the historical city center of Florence.

Also known as The Duomo of Florence, this is the city’s most iconic landmark. 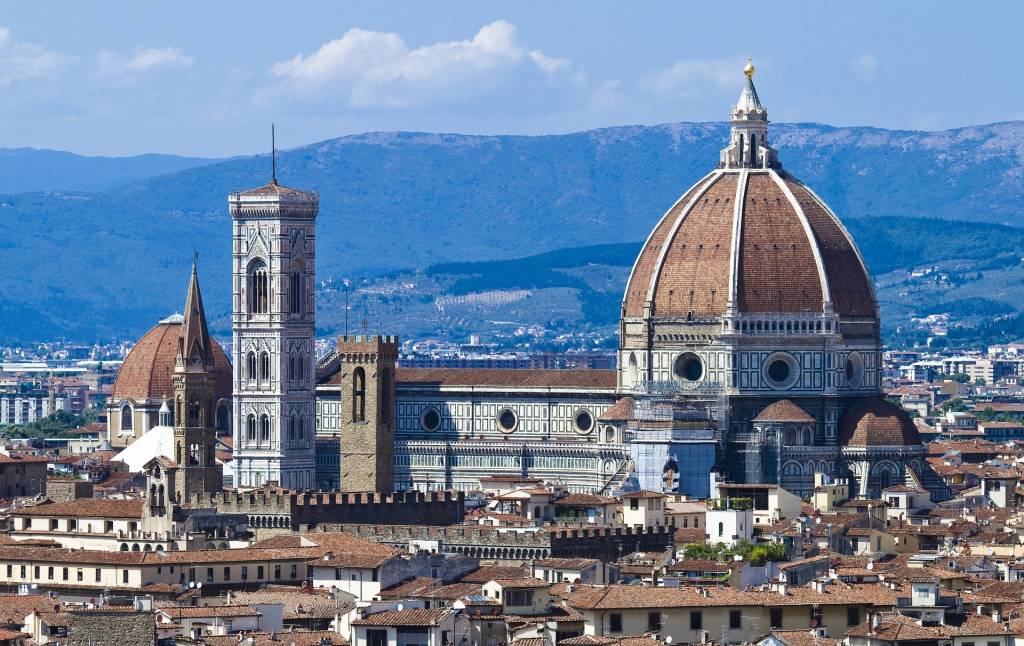 Florence began construction on its magnificent cathedral in the 13th century but it wasn’t until nearly a century later that work on its massive dome began. Designed by Renaissance founding father Filippo Brunelleschi, it is one of the most significant architectural achievements of the period and a lasting symbol of the city. Brunelleschi wasn’t the only famous artist to leave his mark on the church. Ghiberti completed the ornate bronze doors on the baptistery, and Giotto the bell tower. All told, hundreds of architects, artists, and engineers worked on the cathedral during its more than 100-year construction.

This is by far the most important church in Florence. To see it all you’ll need The Great Duomo Museum ticket. This includes the Cathedral, Brunelleschi’s Dome (beware, there are 463 steps to climb), Giotto’s Bell Tower, the Baptistry of San Giovanni, the Crypt of Santa Reparata, and the Opera Museum.

The largest Franciscan church in the world and burial place of the greats.

Santa Croce is one of the most important churches in Florence, and holds just as many impressive statistics as the Duomo. The largest Medieval Franciscan church, Santa Croce was also a convent and theological school that can cite Dante Alighieri as a pupil. An excellent example of Gothic architecture, as the church’s fame and importance grew, the original modest façade was replaced and the structure was continuously made more grandiose.

Artists, theologians, and politicians visited, lived or studied here, and many were buried here as well. Today visitors can see the tombs of Michelangelo, Rossini, Machiavelli and Galileo Galilei in Santa Croce. There is also a memorial to Dante, although his actual body is housed in Ravenna after having been exiled from Florence.

During the flood of 1966, water from the Arno River filled the church up to 5 meters, causing severe damage. Volunteers formed human chains to save as much artwork as possible. Visit the Refectory to see Vasari’s ‘The Last Supper’, which was submerged in floodwater for hours. It has since been restored and, only recently, returned to the Basilica, 50 years after the flood.

Once a small church in a tiny square, the namesake square and basilica have matured into one of the biggest and most important in Florence.

Today, Santa Maria Novella is a gorgeous basilica with a white and green marble façade. Founded by the Dominicans in the 13th-century, the façade was completed during the Renaissance by Leon Battista Alberti. The bottom half was already done in Romanesque style, so Alberti had quite the task to complete it in a more modern aesthetic, while still maintaining a uniform face.

Though the outside itself is a work of art, the inside of Santa Maria Novella is a treasure trove of historical art. Here you can see a crucifix and marble pulpit designed by Brunelleschi. The famed crucifix by a young Giotto, and the incredible perspective shown in the Trinità by Masaccio. You’ll find frescoes by Ghirlandaio and Lippi, and a bronze memorial by Ghiberti.

Located just in front of the Santa Maria Novella train station, the Basilica is easy to find and well worth the visit.

A multi-faceted church with an uninterrupted view of the Duomo from the third-floor museum.

Orsanmichele might just be one of the most overlooked churches in Florence. That’s because it’s hidden in plain sight. Located right in the center of town between Piazza del Duomo and Piazza della Signoria, you won’t be able to find a façade even if you look for it. The church is housed in a three-story building, and the entrance to is located around the corner in what seems like the back.

The church has undergone many transformations. Said to be built during Roman times in place of a temple for Isis–the Egyptian goddess of fertility–it was then a Benedictine oratory in the monastery St. Michael (San Michele). The original structure was destroyed in the 13th century, and an arcade grain hall, office space, and general market hall was built in its place.

Though the structure was commercial, a beautiful fresco of the Virgin Mary remained with multiple “miraculous events” attributed to it. Over time, so many pilgrims flooded the hall that everyday commerce became impossible. So, in the 14th century, the arcade was reconverted back into a church.

Today, the Orsanmichele boasts a mix of civic and religious architecture and art. When visiting, be sure to walk around the outside of the building to see the striking statues standing in the church’s niches, created by artists like Verrocchio, Ghiberti, Donatello, and Luca della Robbia.

One of the largest churches in Florence as well as one of its oldest, San Lorenzo is ground zero for Medici family religious history.

The Basilica of San Lorenzo is one of the oldest churches in all of Florence. The complex is immense, spanning the basilica, cloisters, library, and the Medici chapels. Its history follows the Christian community in Florence as well as the personal history of the Medicis, Florence’s ruling family.

The powerful Medici family was the most influential in Renaissance Florence. They brought together artists and masters of the time for various commissions, including the San Lorenzo Basilica.

Built atop a 4th-century church, San Lorenzo was designed by Brunelleschi for Cosimo the Elder, one of the most famous members of the Medici family, for use as a family temple. Michelangelo designed a white marble façade to showcase the church in all its splendor, but it was never completed. Donatello was commissioned to sculpt two bronze pulpits, among other artwork, as well.

Today Donatello, Cosimo the Elder, and 50 members of the Medici family are buried in the crypt of San Lorenzo.

The Most Beautiful Churches in Florence: Oltrarno

Florence’s Oltrarno district is the neighborhood on the other side of the Arno River (literally, beyond the Arno). A historically residential part of Florence’s center, it remains a hip neighborhood with artisan studios, restaurants and some of Florence’s most beautiful churches.

Located atop a hill in the Oltrarno, just outside the city walls, San Miniato enjoys the best views over all of Florence.

An Abbey built between the 11th and 13th centuries, San Miniato’s hilltop location provides a prime panorama over picturesque Florence. Covered with green and white marble in the same vein as Santa Croce and Santa Maria Novella, the interior is Romanesque in style, and dark and atmospheric. Be sure to check out the mosaic floors and painted wooden ceiling, as well as the crypt in the back decorated by Gaddi. The church itself is surrounded by a cemetery where illustrious Florentines were buried, including the author of Pinocchio!

To get to San Miniato, head to the Oltrarno then follow signs for the 30-minute walk up the hill, or catch the bus to Piazzale Michelangelo and then take the stairs up a bit further to San Miniato al Monte.

A free, hidden gem in the Oltrarno

After a walk down the elegant via Tornabuoni you’ll find Piazza Santa Trinita and the 11th-century church of the same name. The church was enlarged and renovated in the Gothic style in the 14th century and the façade was added in the 16th century.

Be sure to see Ghirlandaio’s altarpiece and visit the Sassetti Chapel with 15th-century frescoes by the artist with references of the time (Lorenzo the Magnificent, a self-portrait, Piazza della Signoria, and Piazza della Trinita).

A Florentine church where the architecture is the art. 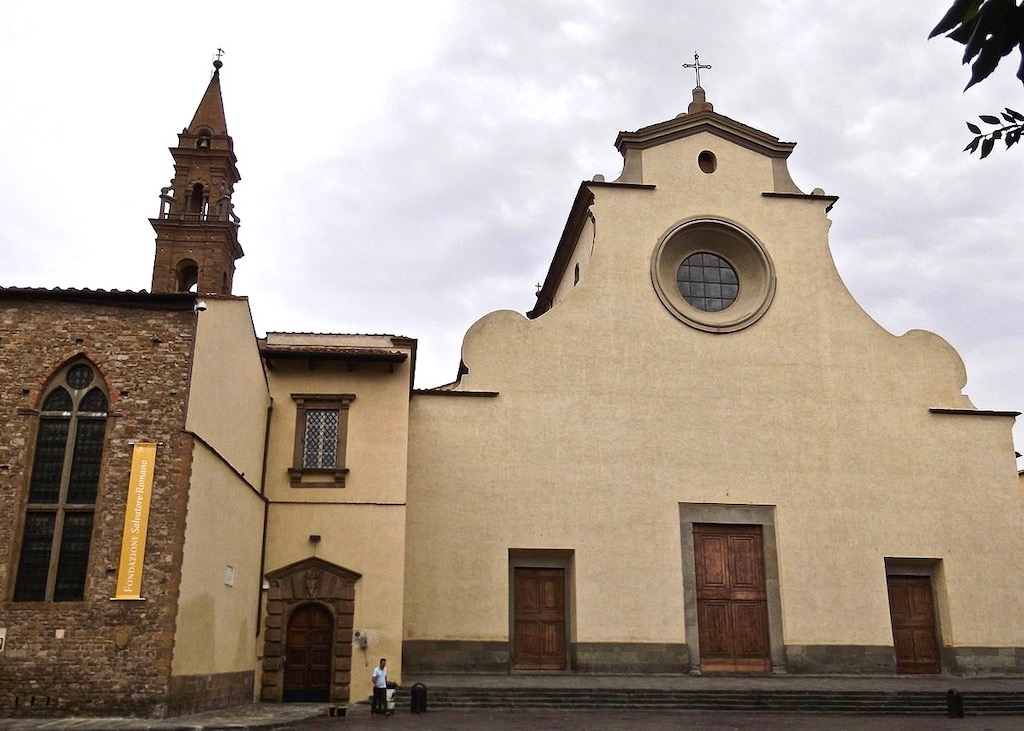 Not many people take the time to truly explore Florence’s Oltrarno neighborhood, the area on the other side of the Arno. If they do, they might pass Santo Spirito more than once before going inside or taking in the Basilica’s perfect proportions.

Despite the stark façade, Santo Spirito Basilica is one of the most important churches in Florence’s Oltrarno neighborhood.

The structure was originally an Augustinian convent located outside of the city walls; however, as Florence grew, the Santa Trinità bridge was built and wealthy families in the Oltrarno district decided to renovate their neighborhood church. They commissioned Brunelleschi to design and build the church, to show the neighborhood’s rising status. Today the church walls are decorated with art by Cimabue, Simone Memmi, and Giottino (Tommaso Fiorentino)

Inside, it’s an exemplar of Renaissance architecture. Brunelleschi designed a meticulous church but died before it was ever finished. His apprentices finished the work as best they could, since the renowned architect left few notes behind.

A young Michelangelo often sought refuge in Santo Spirito. Here he was able to dissect and analyze corpses from the convent’s hospital to learn more about the anatomy of the human body. 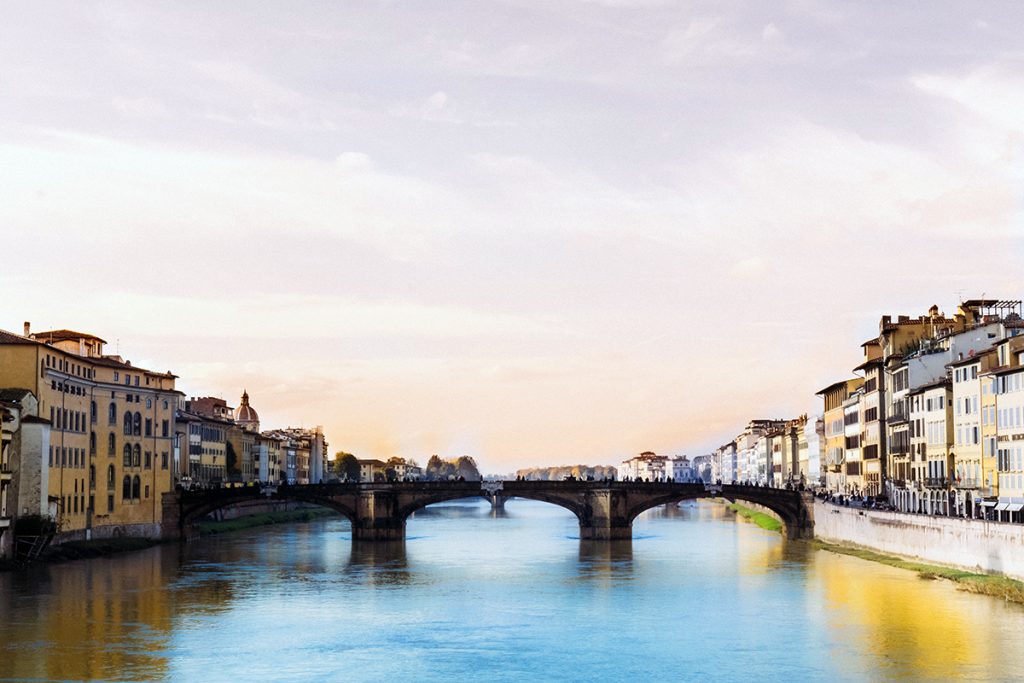 Florence is filled with Renaissance treasures and historical wonders, and many of these masterpieces can be found throughout the city’s churches. These magnificent basilicas offer a glimpse into what made Florence into such a cultural powerhouse over the centuries. While it’s easy to feel overwhelmed by all the options – there are dozens of churches in Florence after all! – it’s nothing that a bit of context and curiosity can’t help solve 🧡

Experience the best of Italian art and antiquities in the cultural capitals of Rome, Florence, and Venice with Ciao Andiamo’s Italy for First Timers bespoke itinerary

How to See an Opera in the Verona Arena

The Coronavirus Crisis Brings Italy Together

8 Reasons Why You Should Visit Matera