A Guide to The Holiday Season in Italy

Most visitors to Italy only think of the Mediterranean summers, but December is a great time to visit the peninsula. Tour Italy’s greatest cities under the twinkling lights of Christmas. It’s the most festive time of the year and the atmosphere and spirit of celebration are addictive!

The holiday season in Italy starts with the Immaculate Conception on December 8th, when cities’ Christmas lights are turned on and Italians officially bring out the Christmas decorations and set up their tree or Nativity scene. Though it’s slightly later than most American’s day-after-Thanksgiving approach, in Italy the holiday season doesn’t end until the Epiphany on January 6th.

A predominately Catholic country, most of the season’s big-hitting holiday dates are from Christmas Eve on December 24th to the Epiphany on January 6th – the original 12 days of Christmas!

Though winter is the low season for travel to Italy, Christmastime does see a spike in visitors, as other Europeans have time off and tourists from all over plan their trip to take in the beautiful sights and smells of the holiday season in Italy. Coming to Italy in December? We’ve got everything you need to know about the holiday season in Italy:

Italians are champions of tradition and there’s no better time to see that than the holidays, when each symbol, event and meal are reminders of the magic of the season. No matter where you’re coming from, there are a few things you can expect to see during the holiday season in Italy: 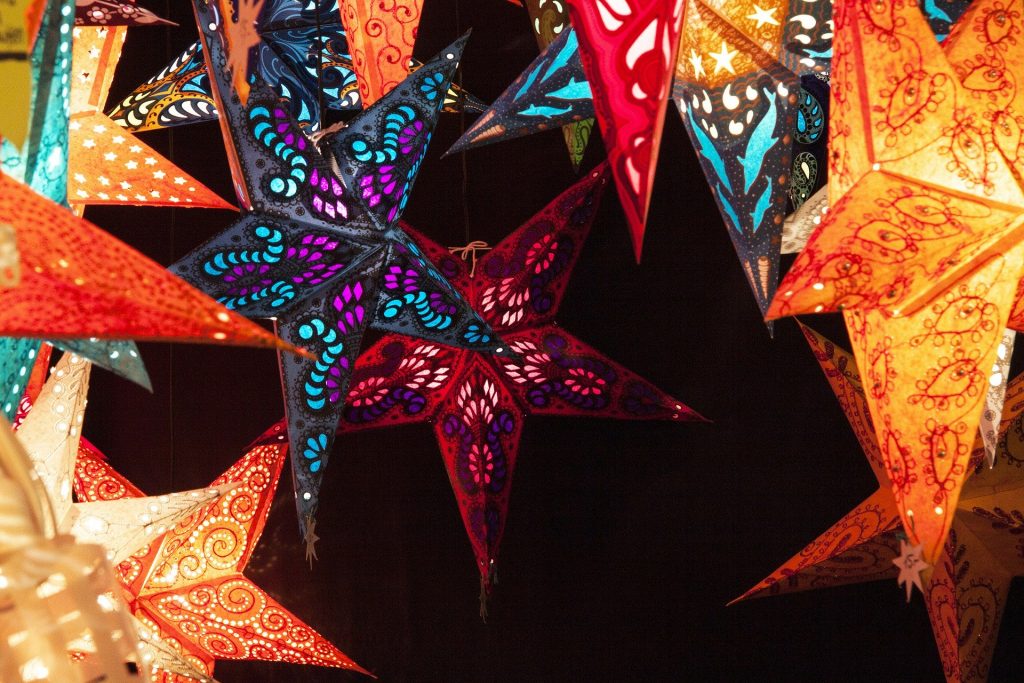 A good Christmas market is a feast for the senses, with delicious smells, warm desserts and drinks, handcrafted wares and atmospheric lights. Photo from Pixabay

Though this tradition is mostly attributed to Germany and Austria, Italians love their Christmas markets as much as their northern neighbors. In December, you can find Christmas markets in most cities throughout Italy. Visit Italy’s largest Christmas market in Bolzano, a city in the border region of South Tyrol. In Florence the historical Santa Croce Piazza fills with a market hailing directly from Germany for the entire month of December or head to Piazza Navona in Rome. Some, like those listed above, last all month, others like those in Genoa, Bologna or Syracuse, Sicily last for a week or two or at a specific time period, like Milan’s O Bej O Bej. The market, that gets it’s name from the local dialect for “how beautiful, how beautiful,”  usually runs for one weekend around the time of Milan’s patron saint festival on December 7th.

Few people in Italy decorate their house or garden with Christmas lights, but each and every town center will be positively lit up with lights and sparkling decorations. Some favorites are Ferrara, Turin, Milan and Rome. Beyond that, you can expect big cities to have a massive pine tree decorated for the season, usually located in front of the Duomo. There’s one in Florence, Milan, Naples and Venice, but perhaps the most impressive is Rome, which has not one, but several Christmas trees throughout the city. You can usually find a tree near the Colosseum, in Piazza Venezia, on Capitoline Hill and, of course, in St. Peter’s Square in the Vatican City. 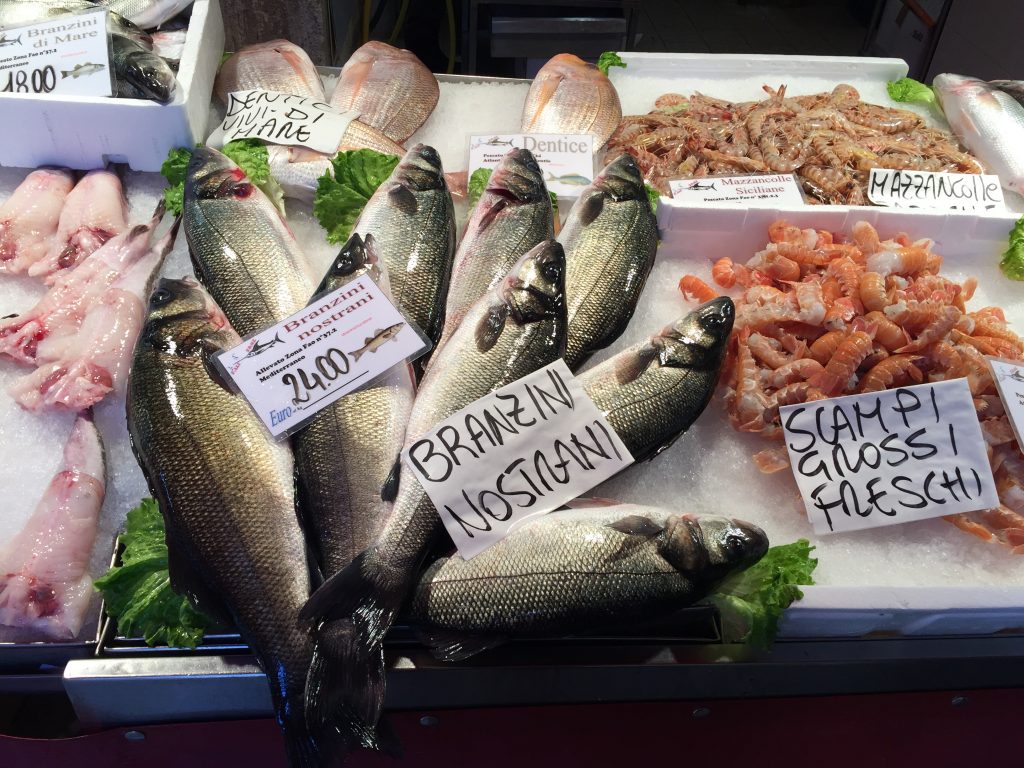 Fish is the traditional meal served on Christmas Eve, as Italians avoid meat and large meals in fasting and preparation for Christmas Day. After dinner many families attend their local midnight Mass. On Christmas Day, families feast the entire day, with a large lunch that usually has multiple courses and dozens of servings. Though every family is different, some regions have specific food traditions for Christmas Day, such as homemade cappelletti in broth in central Italian regions or panettone for dessert in the north.

As always in Italy, you can expect different traditions from different regions. Italy is a nation of city-states and though it’s one country, each area is fiercely proud of its own traditions and culture. Some dates, like December 8th, are national holidays, but there are other important holiday dates for individual regions. For example, Abruzzo celebrates St. Nicholas on December 6th, the generous saint’s feast day, with the nonni dressing up as St. Nicholas and giving gifts to children. The Milanese celebrate their patron saint, St. Ambrose, in style on December 7th, and those from Bergamo (as well as other towns) exchange gifts on December 13th, St. Lucy’s Day, rather than Christmas day.

St. Lucy, or Santa Lucia, is also celebrated in Syracuse, Sicily, where where she’s celebrated with a huge parade that ends in a firework display over the harbor in one of the biggest celebrations of the year. Research in advance your Italian destinations to see the extra events and celebrations they may have in December.

Though caroling isn’t such a common practice anymore, in Lazio, Abruzzo, Sicily and other areas of southern Italy you may still see bagpipe players, called zampognari, playing carols the week of Christmas. Originally a practice of shepherds who would play their Christmas hymns as they returned home from their outposts in the mountains, today it’s continued by locals who want to keep the culture alive. 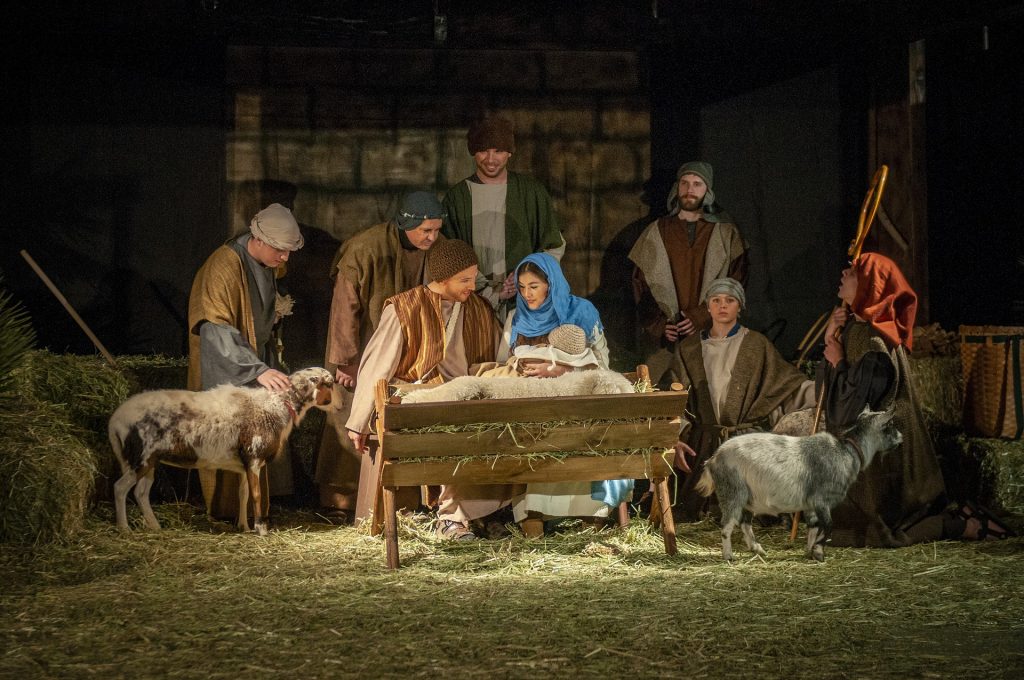 Living nativity scenes with local participants are popular throughout Italy. Photo by Michelle Scott from Pixabay

Nativity Scenes, or presepe, are super popular in Italy. They can be found throughout town and in nearly every Italian home. Some families don’t even put up a tree in lieu of a nativity! These can be super small or enormous, elaborate affairs with collections growing by the generation. You can find the oldest Nativity in the museum of Santa Maria Maggiore Church in Rome, but the place to find hand-crafted Nativities is in Naples. Here the artisan craft is still going strong and you can shop, window shop or simply admire the skilled craftsmen at work on via San Gregorio Armeno. Sometimes called Christmas Alley, this long street in the historic city center has nativity scenes on sale year-round!

Besides these small works of art, another popular tradition in Italy is the “living nativity” with actors and sometimes entire villages as the set. Known as presepi viventi, often the locations are just as suggestive as the scene itself. Custonaci in the Trapani region of Sicily holds its living nativity in a cave, Mantova in Lombardy has around 150 people featured, and the rocks, stones and caves of Matera make for the perfect setting for a reenacted Bethlehem.

Good luck and good fortune for the New Year

New Year’s Eve has fewer specific rituals than Christmas. Italians can celebrate at home, at a restaurant (with reservations well in advanced) or in the piazza where some Italian cities organize concerts and events. Throughout the country, New Year’s Eve is often celebrated in Italy with fireworks, especially in Naples where public and private fireworks can be set off long into the night. Italians eat lentils for dinner for good luck in the coming year, usually paired with a large sausage that requires hours of slow cooking called a cotechino. The tradition doesn’t stop there – be sure to pack a pair of red underwear if you’re coming for New Year’s, it’s considered good luck as well! 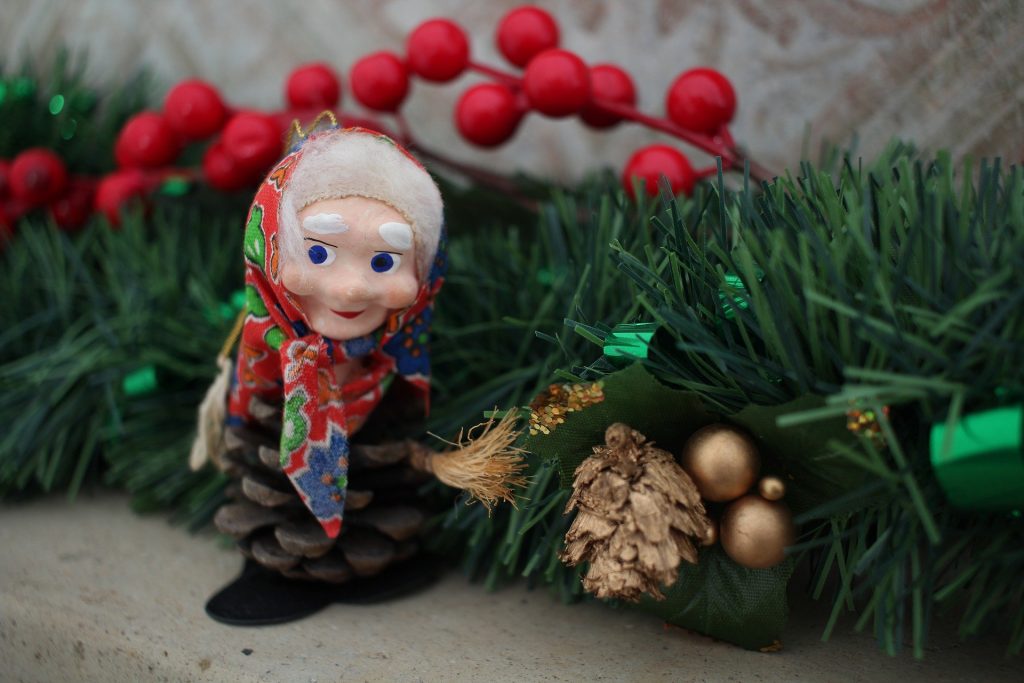 A representation of the Befana, Italy’s Epiphany tradition. Photo by sara150578 from Pixabay

January 6th is another important holiday for the Italian Christmas season. Known as the Epiphany, this is celebrated as the day the three wise men finally reached baby Jesus. In Italy it’s celebrated by an ugly but friendly “witch” known as La Befana who comes during the night to fill children’s shoes or stockings with candy, toys and sweets, similar to a Christmas stocking in America. Remember: l’Epifania tutte le feste porta via, or with the Epiphany, the holiday season is officially over.

It’s no secret that Italy is predominately Catholic, but Italy has a large Jewish population as well. This year Hanukkah starts on December 22 and ends on December 30. The highlight of the Hanukkah celebrations is in Piazza Barberini in Rome’s Jewish quarter where an enormous 20-foot-tall menorah is kept and lit each night. The Jews came to Rome long before Jesus’ time and lived freely until about the Dark Ages, when they were forced into the ghetto for more than 300 years. Today, the Jewish ghetto, or Jewish quarter, is the location of lively events, parties and feasts to celebrate Hanukkah.

Other impressive menorahs can be found in Milan’s Piazza San Carlo, in Florence’s Tempio Maggiore Synagogue, one of the most atmospheric in all of Italy, as well as in Venice where there are not one but five still-active synagogues. Venice’s Ghetto Square includes a Jewish Cemetery and Jewish Museum. Head to the square to see the menorah lighting and the music, dancing and food that follows. 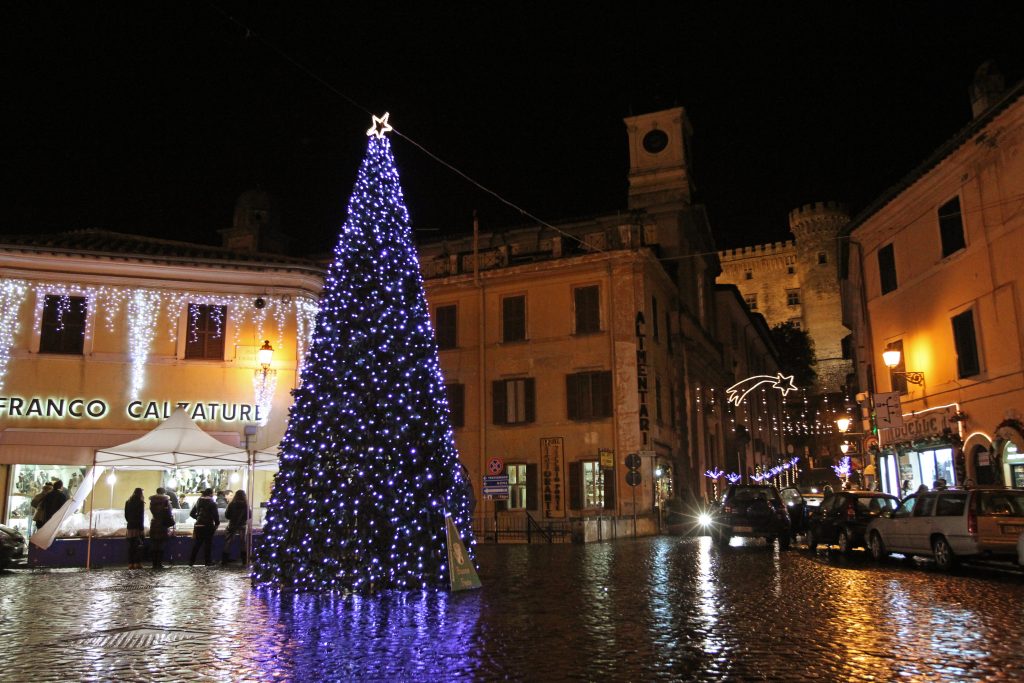 The holiday season in Italy is filled with wonderful celebrations and festivities that are well worth seeing. It also, however, is filled with closures for national holidays or reduced opening hours for winter.

Be sure you plan your visits to museums and sites in advance to avoid going when they are closed. If you happen to be there on Christmas Eve, Christmas Day or St. Stephen’s Day on December 26th, expect most everything to be closed. You’ll definitely want to book restaurants in advance for these days, as well as on New Year’s Eve.

Winter in Italy in general means attractions and transportation schedules change, usually with fewer hours or fewer trains running. Winter is Italy’s low season, but Christmastime usually sees a spike in visitors and crowds and prices may reflect that.

Remember also that just how cold it is depends a lot on where in Italy you are visiting. Up north in the Alps you might be skiing, while down in Sicily you’ll be strolling along the sea with a warming sun.

In general you should still bring a heavy coat, hat, gloves and warm, comfortable boots that can take you from day to night. Italian winters are humid, giving the air a chill even when the temperatures aren’t all that low and in northern Italy you might find rain or snow. Find out more on what to pack for winter here.

Though cold in winter, many of the attractions that you’ll want to see are indoors, making winter just as nice a time as others. Not only that, but the decorations, warm food and festivals make touring around a pleasure, even if it’s cold.