8 Reasons Why You Should Visit Matera

Matera is a remarkable city in Basilicata, a little-visited region in Italy’s extreme south.

A visit to Matera steeps travelers into a unique world of art, history, culture, folklore and the slow pace of Italy’s Mezzogiorno. Matera is famous for its cave dwellings located in the Sassi neighborhoods; homes carved into the soft tufa rock that have been inhabited since the Paleolithic period. It’s ancient on another level, and yet also a working, modern city. 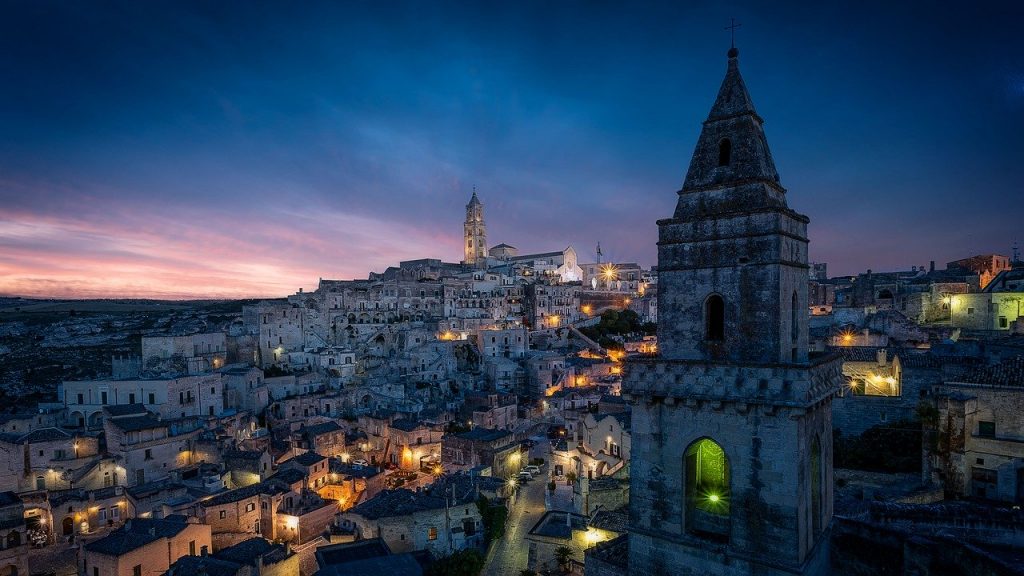 Rural and remote, Matera isn’t the easiest place to reach, which is likely why it hasn’t long been on the radar of many international travelers. But after gaining UNESCO World Heritage Status in 1993 and being declared the European Capital of Culture in 2019 the city is finally starting to get the mentions it deserves.

Today many visitors travel hundreds of kilometers to see this ancient city made contemporary. With one-of-a-kind accommodations complete with modern amenities, travelers are ready to see Italy’s magical city of stone.

Here’s why you should visit Matera on your next trip to Italy:

Matera is counted as one of the three oldest cities in the entire world. It’s been inhabited since the Paleolithic period, the earliest period of human development, as troglodytes carved cave dwellings into the steep rock. Though estimates on the exact dates of Matera’s first occupation vary, evidence from the Neolithic period and even earlier has been found. Today it’s one of the few locations this ancient that is also so comfortable to our modern tastes. Where else can you sleep in accommodation first used 9,000 years ago?

To visit one of the most unique destinations in the world

Matera is one of the most unique destinations on earth, and certainly one of the most unique in Italy thanks to its infamous Sassi districts. In the Sassi, hundreds of cave dwellings spot the steep landscape. Here you can step back in time to walk along ancestral roads and staircases, to rupestrian (carved in rock) churches, and elaborate cave systems-turned-houses or wine cellars or hotels

The Sassi of Matera were a splendor of history, but by the 1950s they were little more than squalid hovels, unacceptable to today’s standards. The caves had barely changed or improved from hundreds of years earlier and the squalor and unsanitary conditions in the town were declared the “vergogna nazionale” or the national disgrace. The citizens were forcibly moved out and relocated to modern houses in a village atop the nearby plateau, leaving Matera abandoned.

In the 1980s interest in the Sassi returned, and many residents began moving back to the area to renovate the old cave houses, eventually turning the empty shell of a town into a fascinating urban center set in an ancient landscape. In fact, UNESCO declared the entire town a World Heritage Site for being the “most outstanding, intact example of a troglodyte settlement in the Mediterranean region, perfectly adapted to its terrain and ecosystem.”

To marvel at the underground architecture

Though the caves might seem like simple dugouts, they’re actually intricate structures that can be quite complex architecturally. Elaborate renovations were made during the Renaissance when many caves gained new façades, vaulted ceilings or complicated staircases connecting arches, attics, balconies, and cantinas. The Sassi have dozens of tunnels connecting them, proving that what we see is just a scratch under the surface of this elaborate cave system.

Besides the caves, head underground to see the wonders of ancient technology in the Palombaro Lungo, the largest of the Palombari water collection tank system. The Palombaro Lungo is a giant cistern carved into the rock, as large as an underground cathedral, that has supplied water to Materans as far back as the 16th-century. Ingenious and state-of-the-art for the time, the system located under Piazza Vittorio Veneto is one of the best-conserved examples of historical hydraulics and architecture in the world.

Matera is a land with a strong faith going back centuries. There are at least 21 parishes and several churches that have been carved into or out of the rock, as well as others built aboveground on the Piano (plateau) above the town. Then there are the more than 150 churches in the Sassi district itself along with the Murgia National Park.

Though it might be impossible to properly see them all on one trip, the town’s churches are a fundamental part of its history and truly a must-see. Start with the Romanesque Cathedral, whose privileged position atop Civitas hill gives breathtaking views overlooking the Sassi Barisano. Other favorites include the death-themed Chiesa del Purgatorio, the Lecce-inspired San Francesco d’Assisi, the simple interior of Materdomini and the great views from Sant’Agostino.

To see the rupestrian churches of the Murgia National Park

The Park of the Murgia Materana overlooks Matera from gorges and caves beyond the Gravina ravine. A UNESCO World Heritage site along with the Sassi of Matera, here you’ll find more than 150 rock churches to explore.

These rock churches, known as rupestrian churches, were mostly constructed in the Byzantine Empire of the 8th and 9th centuries. Though many are not so well conserved, some of the cave churches still have faded Byzantine frescoes inside. A favorite rupestrian visit is Santa Maria de Idris. Partly carved into the rock and partly built, this 12th-century church is connected by tunnel to the rock crypt of St. John in Monterrone.

Though they were created as religious places of worship, over the years many of the rupestrian churches became multi-use, serving as homes or stables for animals, including the popular Crypt of Original Sin, considered the Sistine Chapel of rupestrian art for its magnificent 8th-century frescoes.

To experience a real-life movie set

Ancient and enchanting, Matera is the perfect setting for historical films and TV series. Though there are older settlements in the Middle East that film crews could use, few are as easy to access with as comfortable accommodations and amenities as Matera.

Approximately 90 movies have been filmed in Matera, from documentaries to neorealism pieces to TV fiction. Film buffs who want to catch a glimpse of Matera’s majestic backdrops can rent Nel Mezzogiorno Qualcosa È Cambiato, a documentary on the plight of Matera in the 1950s; Gli Anni Ruggenti, a comedy about an insurance salesman caught in a misunderstanding in the South; L’Uomo delle Stelle, which is set in Sicily but shot in Matera; or of course, The Passion by Mel Gibson, a story of the last 12 hours of Jesus’ life.

A city carved into the rock, Matera is innately a city of sculpture. Though the ancient sculpture is the town itself, more contemporary fare is still available. Matera’s Museum of Contemporary Sculpture, or MUSMA, is the only cave-museum in the world. Housed in the underground of Palazzo Pomarici, the story of Italian and international sculpture is told through 500 different pieces.

After all, what more delightful place to view contemporary sculpture art than in a remarkably ancient town carved by cavemen themselves?

To celebrate the Festa della Bruna

The Festa della Bruna is the principal event in Matera’s calendar, truly the Materans’ New Year’s Day. Though it’s celebrated for an entire week, the culmination is on July 2nd when time stops in Matera to celebrate the town’s patron saint. Dating back to the 14th century and in remembrance of the Madonna, the festival is far from solely religious, going from sunrise into the dead of night.

The entire town is illuminated by bright lights and decorations. Market stalls and town bands set the atmosphere and a procession of shepherds “wake up” the town at the crack of dawn on the day of the event. Later, the statue of Madonna della Bruna is carried through the town streets on a parade float to the Duomo. Once there, the crowd attacks the float, destroying it piece by piece – a piece of the float is thought to bring luck. The entire event concludes with a huge firework display on the other side of the ravine in the Murgia Park.

A festival for locals by locals, it’s a dramatic event for tourists who, if prepared, can witness the excitement, passion, and euphoria of the event.

Travelers to Matera experience a unique destination, taste the city’s distinctive slow pace and step into a world unto itself. And that’s reason enough to visit!

Le Marche: Where It Is and Why You Should Go